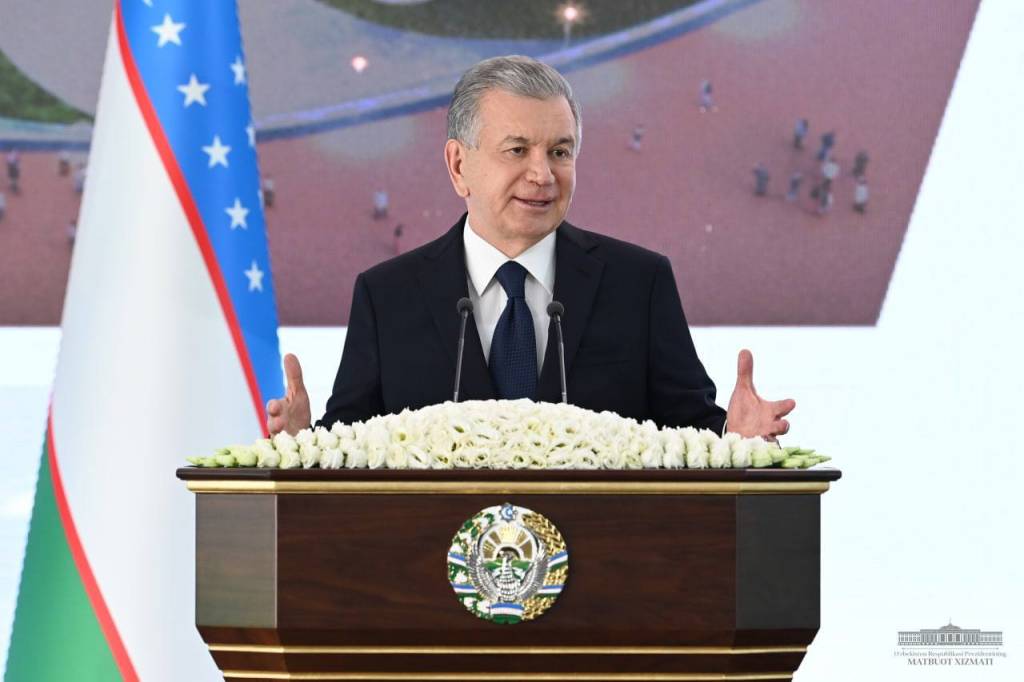 On November 9, the ceremony of laying the first stone in the construction of the Olympic Village facilities took place in Tashkent. President Shavkat Mirziyoyev attended the event.

At the beginning of his speech, the Head of the state congratulated everyone on this historic event and noted the importance of the projects.

“We have our way, our aspirations and plans. We believe that the historic work that we are starting today will yield great results. This confidence gives us strength”, Shavkat Mirziyoyev noted.

Large-scale work is being carried out in Uzbekistan to popularize sports and support athletes. Over the past five years, almost 4 trillion UZS have been allocated to this sphere. 118 large facilities have been commissioned and 110 have been reconstructed.

Thanks to the attention and conditions created this year, Uzbekistan’s athletes have won more than a thousand medals at various international competitions. In particular, Uzbekistan national team took first place at the Chess Olympiad held in India’s Chennai. At the Islamic Solidarity Games in Konya (Türkiye), the representatives from Uzbekistan took second place in the overall standings, winning 158 medals.

The most high-profile and large-scale upcoming events are the Asian Games and the Asian Para Games among youth, which will be held in Tashkent in 2025. Young people from 45 countries will compete in almost 20 sports.

It should be noted that such a prestigious international event is being held for the first time in the history of Uzbekistan. A project for the construction of a modern Olympic Village was developed to ensure high organization. The Head of the state got familiar with this project several times and gave instructions. Taking into account the recommendations, the project was finalized together with the chief designer – China’s CAMC Engineering Company.

“I am sure that the Olympic Village will become a symbol of the high creative potential of our people and the unprecedented achievements of Uzbek sports. This facility will be a modern complex with breakthrough architecture, energy efficiency and incorporating the most advanced innovative solutions”, Shavkat Mirziyoyev noted.

The cost of the project is more than $289 million. The area of the village will be 100 hectares. An athletics and football stadium with 10,000 seats, 6 indoor and 7 outdoor sports facilities, a water sports palace, a cycling track, and complexes for martial arts and team sports will be built here.

“If we look at our glorious history, we will see that our ancestors built magnificent buildings for future generations. We continue the noble traditions of our ancestors and are doing a lot of creative work in our country. Of course, such large-scale projects are developed through the joint efforts of many people and with the active participation of our hardworking people”, the President noted.

It should be noted that after the competition, the complex will not be empty. Later, the Ministry of Sports Development, sports federations, and the State Sports Academy of Uzbekistan will be located here. The complexes will be available to compatriots for sports.

The event was attended by famous athletes, heads of federations, veterans of the sphere, representatives of state and public organizations.

President Shavkat Mirziyoyev laid the first stone in the foundation of the Olympic Village.

“A lot of projects are being implemented in all spheres of our country, and more and more facilities are being built. At the heart of all this lies the great work of our great people, their confidence in the future. God willing, there will be even more such projects”, the Head of the state said.

Director General of the Olympic Council of Asia Husain Al-Musallam, President of the Asian Paralympic Committee Majid Rashed, General Manager & Director of China CAMC Engineering Li Haixin, Chairman of the Council of Veterans of Sports Organizations of Uzbekistan Bakhodir Makhsitov and athletes addressed the event. They shared their views on the conditions and the important role of the future village.