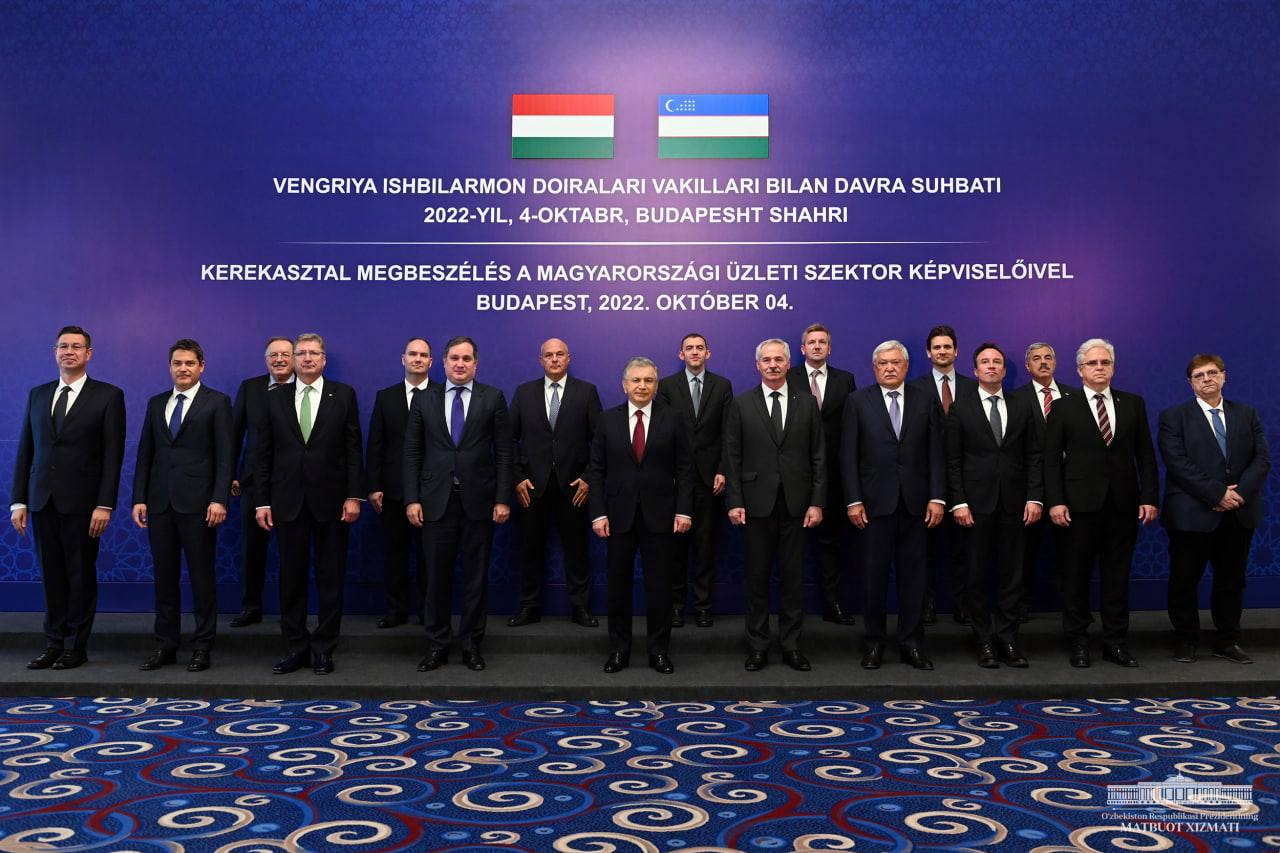 The President of the Republic of Uzbekistan Shavkat Mirziyoyev held a meeting with the heads of leading Hungarian companies and banks in Budapest.

The event was attended by Hungary's Minister of Economic Development Marton Nagy, Chairman of the Chamber of Commerce and Industry Laszlo Parrag, the head of OTP Bank Sandor Csanyi, as well as the heads of about 20 major companies and corporations, such as Gedeon Richter, Bonafarm, Wizz Air, Raba Holding, Meditop, Master Good, Kite and others.

It should be noted that open meetings with business circles have become an indispensable attribute of the Uzbek President's visits. They facilitate the establishment of direct contacts and advancement of our country's successes in trade and economic sphere, and attract foreign investors to implement mutually beneficial projects.

Hungary is a country with one of the most dynamic economies in Europe, boasting remarkable capacities in agriculture, industry, trade, tourism, finance and information technologies.

Trade and economic cooperation between our countries has been dynamically developing in recent years. Over the last 5 years, trade turnover has tripled. The number of joint ventures and investments is growing.

During the meeting, the sides discussed prospective areas of mutually beneficial cooperation in such industries as pharmaceuticals, agriculture, food processing, electronics and electrical engineering, chemicals, textiles, leather and automotive industry.

It has been noted that wide-ranging reforms are being implemented in Uzbekistan with the purpose of cardinal improvement of all spheres and sectors of the economy, as well as the wellbeing of the population.

The President of Uzbekistan enumerated the principal achievements of Uzbekistan's economic policy in recent years, including liberalization of currency market and repatriation of profits, privatization program of state assets and banks, industrial and infrastructure facilities, tax reform and much more.

«The New Uzbekistan Development Strategy stipulates the continuation of the work to create the most favorable conditions for entrepreneurs and increase the presence of foreign businesses in our country. The main thing is that foreign corporations have believed in our reforms», Shavkat Mirziyoyev has said.

The meeting announced the creation of a joint Fund for financing priority projects, which will be launched in the near future.

It was proposed to set up a separate industrial zone exclusively for Hungarian companies, which would be provided with all the necessary production infrastructure.

The President suggested that future joint projects, development of scientific inventions within their realization, design innovations and technologies of Hungarian partners in the course of their implementation would produce a great synergy effect.

President Shavkat Mirziyoyev addressed to each member of Hungarian business delegation. A detailed exchange of views on plans to implement specific joint projects has been held. A firm willingness to fully support Hungarian businesses in implementing their investment plans has been expressed.

«I invite every businessman to visit our country and personally ascertain that Uzbekistan is the best place to invest today!» - the President has noted.

In turn, the representatives of Hungarian business circles expressed their appreciation of the results of ongoing systemic economic reforms in Uzbekistan, and expressed willingness to enter our country's market and implement promising joint projects.

Another clear evidence of the high mutual interest in cooperation is the Uzbek-Hungarian business forum held the day before, during which the sides signed investment, trade and financial agreements amounting to more than $1 billion.

At the conclusion of the meeting, the sides reached agreement on «Road map» for practical implementation of all projects initiated with an indication of specific deadlines and responsible officials.

The heads of Uzbek ministries and agencies have been tasked to provide all possible assistance to Hungarian partners in carrying out successful business activities in our country.