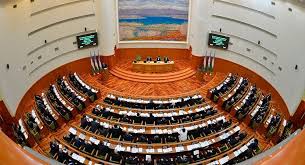 On July 15, 2022, a joint meeting of the Kengashes of the Legislative Chamber and the Senate of the Oliy Majlis of the Republic of Uzbekistan was held in Tashkent.

During the session, a request of the Authorized Person of the Oliy Majlis of the Republic of Uzbekistan for Human Rights (Ombudsman) on the issue of ensuring human rights and freedoms in the Republic of Karakalpakstan was considered.

The Kengashes adopted a joint resolution on the formation of a new independent Commission to study the facts and events that occurred in the Republic of Karakalpakstan in July 2022 and conduct an independent investigation on them.

The composition of the newly formed Commission and its regulations were also approved by this resolution.

The Commission includes members of the Parliament, people's deputies, representatives of non-governmental and public organizations.

Ms. Feruza Eshmatova, Authorized Person of the Oliy Majlis of the Republic of Uzbekistan for Human Rights, was appointed as the Head of the Commission.

The results of the investigation will be published and brought to the attention of the world community.