Development of trade, economic and investment cooperation between the countries of Central Asia - as a factor in ensuring their development 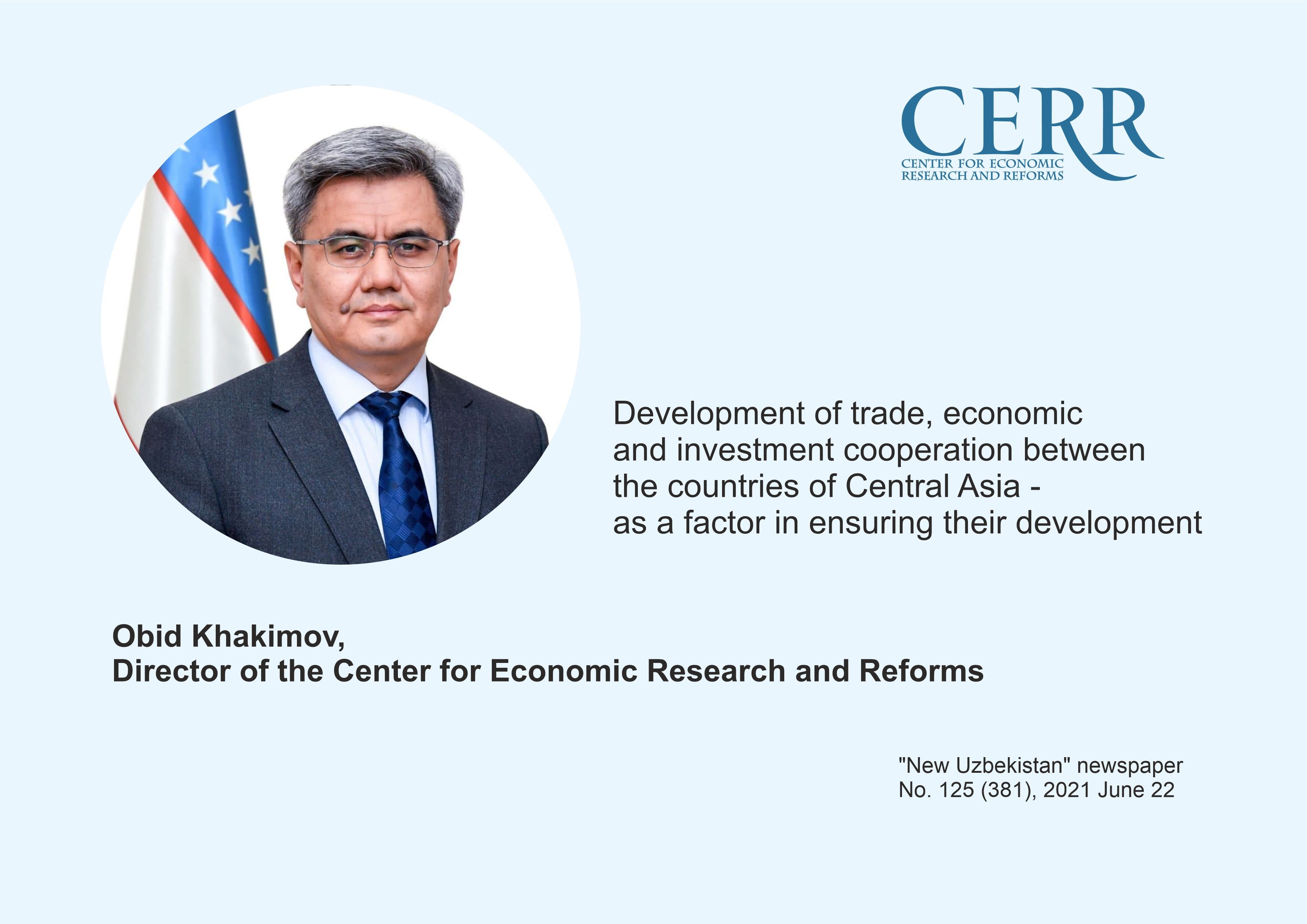 Development of trade, economic and investment cooperation between the countries of Central Asia - as a factor in ensuring their development

The prior importance of the Central Asian countries in foreign policy was designated by the President of Uzbekistan immediately after his election and subsequently confirmed by the practical actions and initiatives of our state. Such a policy, aimed at strengthening friendly relations between Uzbekistan and neighboring countries, ensured stability and security on its external borders, which is one of the important conditions for the investment attractiveness of the country.

In 2021, the President's Address to the Oliy Majlis, special attention was also paid cooperation with the countries of Central Asia. The President called the priority of this policy "further strengthening of centuries-old friendship, good-neighborly relations, strategic partnership and mutual trust with the states of the region."

According to the initiative of the President, the International Institute of Central Asia was established in Tashkent and on July 15-16 this year, a high-level international conference “Central and South Asia: Regional Interconnectedness. Challenges and Opportunities ” will be held.

The strengthening of regional cooperation was also facilitated by the initiative of the President of Uzbekistan to create a format for annual consultative meetings of countries. The first such meeting was held in Astana in 2018, the second in 2019 in Tashkent, and the third in connection with the pandemic was postponed to the current year.

It is significant that the President also began his first foreign visit in March 2017 from the countries of Central Asia - Turkmenistan and Kazakhstan, followed by trips to Kyrgyzstan and Tajikistan. As part of these visits, business forums were held and significant packages of bilateral intergovernmental agreements on trade, economic and investment cooperation were signed. This contributed to the increase in mutual trade and the development of cooperation ties between Uzbekistan and partners in Central Asia. In addition, the practice of establishing direct contacts between the border regions of Uzbekistan and neighboring countries, as well as holding regional economic forums was carried out. Subsequent joint visits of the leaders of the Central Asian countries to Uzbekistan consolidated the foundation of multilateral cooperation and expanded the spheres of economic and investment interaction.

Only in March, 2021, the head of Kyrgyzstan visited Uzbekistan and in June the leader of our country visited Tajikistan. During these visits, agreements were reached on further deepening cooperation through industrial cooperation, joint implementation of large investment projects and the creation of joint ventures.

In particular, the goals were set to double the mutual trade turnover with Kyrgyzstan and Tajikistan in the coming years, as well as the joint implementation of hydropower projects "Construction of the Kambarata HPP-1" in Kyrgyzstan and the construction of a HPP on the Zarafshan River in Tajikistan, which forecasts to improve water supply in Uzbekistan.

In order to facilitate the promotion of domestic products to their markets, trading houses of Uzbekistan began to operate in neighboring countries. For example, in June of this year, the National Exhibition Hall (showroom) "Made in Uzbekistan" was opened in Dushanbe.

Therefore, Uzbekistan’s friendly and mutually beneficial relations with neighboring states creates a solid foundation for expanding trade, economic and investment cooperation, as well as interaction in the transport sector with the countries of the region.

However, for the period January-April 2021, the trade turnover of Uzbekistan with the countries of the region increased by 24 percent compared to the same period last year. At the same time, the share of Central Asian countries in the total trade turnover of Uzbekistan increased to 17.2 percent, which indicates the expansion of intra-regional trade.

In January-April 2021, the volume of exports to Central Asian countries increased by 21 percent compared to the same period last year, while the share of these countries in total exports of Uzbekistan increased significantly.

Considering that mainly finished products of the manufacturing industry are exported to the countries of Central Asia, the share of these countries in the total export volume will be much higher, excluding the export of raw materials, which are mainly supplied to third countries.

Dynamics of Uzbekistan's exports to CA countries (in million dollars)

There are great prospects for further increasing Uzbekistan's exports to the markets of Central Asian countries. In 2020, the total foreign trade turnover of the countries of the region amounted to $142.6 billion, of which 12.7 billion or 8.9 percent is the share of intra-regional trade.

At the same time, there are great prospects for increasing the volume of intra-regional trade, especially for finished products. Calculations carried out according to the methodology of the International Trade Center (ITC) show that there is an unrealized export potential of the Central Asian countries in mutual trade in the amount of $1.1 billion, in particular, in food products for 530 million, chemical products for 180 million, for metallurgical products for 120 million.

With the growth of economies and populations of countries, the total potential of the internal regional market will increase and the expansion of cooperation ties and mutual trade will increase its investment attractiveness.

According to the report of the international consulting company BCG, the potential of Central Asia to attract foreign direct investment over the next 10 years is estimated at up to $170 billion, including $40-70 billion in non-resource sectors.

Uzbek capital has also begun to actively participate in neighboring countries, for example, a joint venture for the production of consumer electronics "Artel Avesto Electronics" is successfully operating in Tajikistan, and a joint venture for the production of transformer and processing of agricultural products is planned. In Kyrgyzstan, in the Osh region, joint productions of plastic windows and doors, as well as household appliances have been created and it is planned to create joint enterprises of agricultural equipment and vehicles in the future.

For Uzbekistan, the issue of establishing reliable and safe transport routes is extremely important due to the fact that in order to deliver goods to open seaports, our freight carriers need to cross the territory of at least two countries in any direction.

During his first visit to Turkmenistan, the President of Uzbekistan took part in the opening of the “Turkmenabad-Farab” railway and road bridges across the Amu Darya River, which will increase the volume of cargo transportation by 2.5 times and an important section of the “Uzbekistan-Turkmenistan-Iran transport and transit route -Oman".

An important project for Uzbekistan is also the construction, jointly with Kyrgyzstan and China, “China - Kyrgyzstan – Uzbekistan” railway, which can reduce the distance by 900 km, and the delivery time of goods by 7–8 days.

A promising area of cooperation with Kazakhstan in the transport sector is the formation of end-to-end, including multimodal, transport routes in the north-south direction and back with a single tariff policy, which will increase the transit potential of the two countries.

The geographical location of Uzbekistan in the center of Central Asia makes it possible, within the framework of intra-regional trade, to carry out direct deliveries of goods to the markets of neighboring countries along short routes and minimize transport costs, which will positively affect the competitiveness of domestic goods and create good prospects for increasing export volumes.

In conclusion, it should be noted that the policy of openness and mutually beneficial cooperation pursued by Uzbekistan finds support in the countries of Central Asia, which highly appreciate our efforts aimed at creating an atmosphere of trust and good-neighborliness in the region and express their readiness to jointly turn the region into a space of stability, security, sustainable development and common prosperity, which will undoubtedly contribute to the accelerated development of the economies.

Director of the Center for Economic Research and Reforms under the

Administration of the President of the Republic of Uzbekistan.