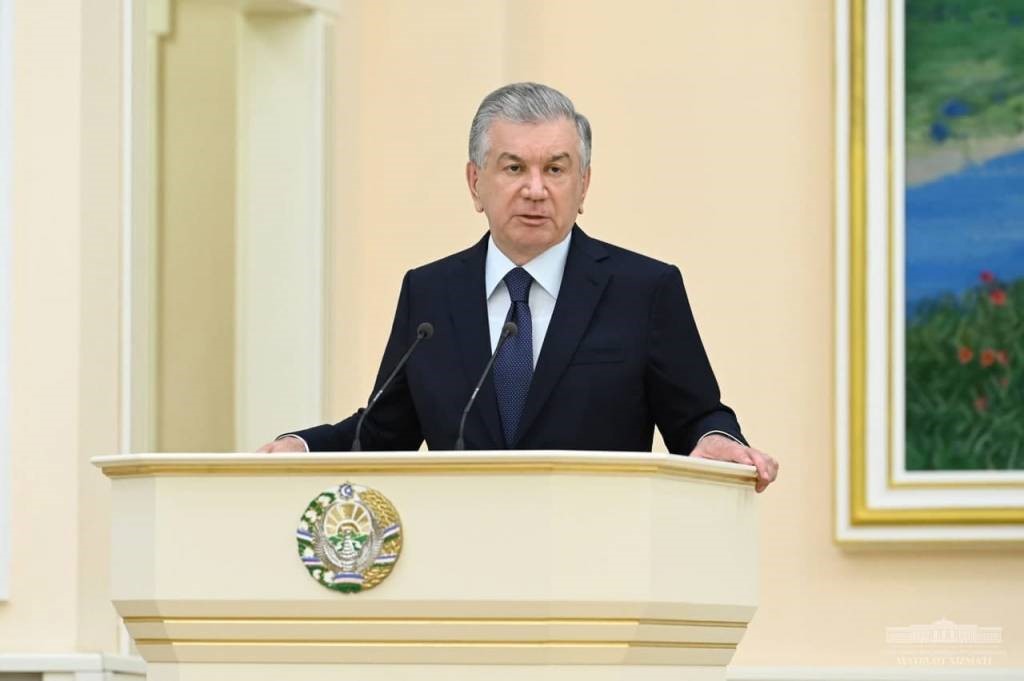 Today, I appeal to all those who are not indifferent to the fate and future of our dear Motherland; peace and stability in our precious land.

The alarming events that took place in the Republic of Karakalpakstan has caused pain in the heart of every one of us, for all citizens of Uzbekistan.

As you well know, these days are important for the continuation of the political process in our country – the national discussion of amendments and additions to the Constitution of the Republic of Uzbekistan.

The constitutional reform was initiated to further the country’s socio-political and socio-economic development, ensuring citizens’ rights and freedoms, and implementing the noble idea – « The human interests are above all!»

Despite the creation of conditions for the free expression of will and opinions of citizens based on democratic principles and legal norms, under the pretext of disagreement with the constitutional reforms, the certain forces, for their own selfish purposes, are trying to destabilize the situation in Uzbekistan, choosing the path of aggression and violence.

Their main goal is to split society, reduce trust in the state’s creative policy and damage Uzbekistan’s territorial integrity.

As previously reported, on July 1, 2022, in Nukus, under cover of populist slogans, manipulating the consciousness and trust of citizens, a group of people, contrary to the legitimate demands of the authorities, organized unrest and attempted to seize the buildings of the local government.

On July 2, 2022, despite demands to stop disturbing public order, these persons continued their destructive actions in the main streets of the administrative center of the Republic.

Moreover, some participants in the events tried to provoke clashes with law enforcement officers, force their way into the guarded areas, and pelt the buildings with stones and other objects.

As they moved through the streets, rioters have inflicted significant damage to the infrastructure, breaking windows and setting fire to buildings. In order to seize weapons, several groups attempted to storm the buildings of the Nukus Department of Internal Affairs and the National Guard Department.

Taking advantage of their relative numerical superiority, they have attacked law enforcement officers, beating them with particular cruelty and inflicting severe bodily injuries.

Unfortunately, there were casualties among civilians and law enforcement officers.

In order to ensure the safety of citizens, to protect their rights and freedoms, and restore the rule of law, in accordance with the Constitution and the Law of the Republic of Uzbekistan «On the State of Emergency», I have signed a decree on introducing a state of emergency on the territory of the Republic of Karakalpakstan from July 3 to August 2, 2022.

I hope that during the implementation of this Decree, the multi-ethnic people of Karakalpakstan will mobilize all their strength and capabilities, and unite for the sake of peace and stability, ensuring civil accord – the basis of the well-being and prosperity of the country.

I want to emphasize once again that the draft of the Constitutional Law “On Amendments and Additions to the Constitution of the Republic of Uzbekistan” has been made public and is under public discussion. It will be amended and finalized based on the proposals and opinions of the people of Uzbekistan.

The process of discussing amendments and additions to the Constitution continues. At the meeting with Deputies of Jokargy Kenes, the representatives of the elderly and activists of Karakalpakstan, taking into consideration the study of opinions of residents of the Republic, I have proposed to leave without changes the acting versions of articles 70, 71, 72, 74, 75 of the Constitution of the Republic of Uzbekistan, concerning the legal status of the Republic of Karakalpakstan.

The Legislative Chamber of the Oliy Majlis will consider this issue in the coming days.

Dear Deputies and residents of Karakalpakstan!

As you well know, in recent years, we have worked together on large-scale constructive work to ensure the comprehensive social, economic, cultural and innovative development of Karakalpakstan. Its practical results are felt today by every resident of the country.

For the last five years, about 11 trillion Uzbek soums have been allocated to the local budget of this region. The program of social protection of the population is consistently implemented. Much work is being done to reduce poverty.

In particular, material assistance was provided for approximately 65,000 families included in the «Iron Book», 17,000 families with disabled children under the age of 16, and those who lost their breadwinners.

By 2020 alone, the total per capita income in Karakalpakstan has increased almost three times.

Over the past five years, the volume of construction work has increased 3.5 times. Dozens of new industrial enterprises, modern agricultural clusters and joint ventures were created. In addition, thousands of facilities were built, reconstructed and repaired in the Republic, including kindergartens, general education and specialized schools, universities, health, science, culture and sports institutions.

Under the «Obod Kishlok» and «Obod Makhalla» programs, the Republic of Karakalpakstan has extensively worked to develop social infrastructure, providing the population with electricity, natural gas and portable water, and improving irrigation and reclamation networks.

The active work on protecting and restoring the ecological system and sustainable social and economic development of the Aral Sea region is being carried out. In particular, once backward Muynak has acquired a completely new appearance and turned into a modern, dynamically developing region.

The area of 1,733,000 hectares of greenery has been planted on the dried-up part of the Aral Sea. A five-year national program to restore flora and fauna of the region is being developed. For the first time, the issue of its development is defined as a priority of state policy. The Aral Sea area problem is regularly raised from high international tribunes.

I firmly state that the positive changes in Karakalpakstan will continue to be carried out at an accelerated pace.

I believe in the wisdom of the people of Karakalpakstan, hardened in the trials of life. I urge them to show prudence, not to yield to provocations, including those of external hostile forces and movements, and not to become their victims.

The calls for separatism, mass disorders, forceful methods of confrontation with the authorities will be strictly suppressed under the current legislation, and the perpetrators will face inevitable punishment.

I am convinced that in this difficult period the hard-working, wise, noble and generous people of Karakalpakstan will continue to adhere to the inviolable values of unity and indivisibility of the fates of the Uzbek and Karakalpak peoples.

What has happened calls us to be even more vigilant and attentive. Today as never before, we need a strong will, solidarity and unanimity for the sake of peace and harmony in our native Uzbekistan, for the sake of the future of our children and grandchildren.

I would like to take this opportunity to address all my fellow compatriots who consider Uzbekistan their Motherland, our respected fathers and mothers, our dear brothers and sisters, and our youth.

It is no secret that tough competition, threats as interethnic and inter-confessional conflicts, separatism, nationalism and radicalism are on the rise in various regions of the world.

In such an alarming situation, strengthening friendship and harmony between the representatives of different nations and religions, ensuring stable and continuous development in our beautiful country, and increasing the creative potential of our people and their confidence in the future is not only a task but also a human duty of each and every one of us, primarily of leaders and decision-makers.

This is the only way for us to respond to all modern challenges and threats, develop a steadfast immunity to various destructive ideas in our society, especially in our young people, to achieve even higher results, and keep the path of democratic reforms chosen by our people.

All of us share the same Motherland. We are united by one great goal – peace in our Motherland, the country’s prosperity, and the people’s well-being.

Together we will surely build a new Uzbekistan and a new Karakalpakstan.

I am sure that our brave and noble people, who have overcome many difficult trials in their history, will achieve these great goals.