Peace and tranquility are the foundation of all our achievements 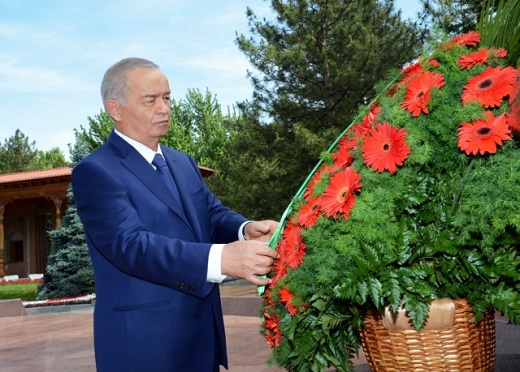 Peace and tranquility are the foundation of all our achievements

At the initiative of President Islam Karimov, May 9 - Memory and Honor Day is widely celebrated in our country as a national holiday

Honoring the memory of ancestors, a manifestation of special respect and attention to the representatives of the older generation, who have made a worthy contribution to the peace and development of the country, remain one of our national values. Day of Memory and Honor, which is widely celebrated by the initiative of the head of our state, is also embodies these noble principles.

On this holiday we remind once again, at the expense of which hardships and difficulties we achieved peaceful and quiet life, well-being and prosperity, more deeply aware of the importance of independence, peace and tranquility prevailing in our country.

Securing a prosperous life of the older generation, strengthening their health, creating the necessary conditions are in the focus of constant attention of our state. Decree of the President Islam Karimov "On the promotion of the participants of World War II" dated April 18 this year, is another sign of honoring veterans. In accordance with this decree war veterans in a solemn atmosphere were handed cash rewards and holiday gifts.

Quiet melody sounds over a square.

9:00. The President of Uzbekistan Islam Karimov comes in the square.

The head of state laid a wreath at the monument of "Sorrowful mother" to the sounds of military orchestra.

President of Uzbekistan honored the memory of our compatriots who perished in World War II.

- In these days, in all the cities and villages of our country, in every family, everyone, all of our fellow citizens widely celebrate May 9 - Day of Memory and Honor, 71st anniversary of the Victory over fascism in the Great Patriotic War, Islam Karimov said in an interview with the media. - It gives me great pleasure to congratulate our veterans who have shown courage and heroism in winning this great victory, our compatriots, who selflessly worked in the home front, and wish them health and long life.

It is a duty and honor for all of us to pay tribute to those who in the name of the current peaceful life and a clear sky fell on the battlefield.

Today, being present in this square of Memory, which has become a sacred place for our people marking Victory Day, reached in the bloodiest war in the whole history of the world, which led to innumerable victims, sorrows and suffering, it should be emphasized that despite the lapse of many years, there is no person in our country who has forgotten the brutal war and its consequences.

This date, which will remain in history as a memorable day, the fact that among the thousands and thousands of people of different nationalities who have shown courage and perseverance in the conquest of the victory over fascism, there were many of our fellow citizens, our fathers and grandfathers, many of whom have not returned from the war, 338 of our compatriots were awarded the title of hero, thousands - were awarded military orders and medals - all of this, of course, fills our hearts with pride.

However, when it comes to the contribution of our people in the struggle against fascism, we are reminded again and again to the immeasurable loss that will always remain an open wound in our hearts.

In this regard, I think it is appropriate to cite the following figures.

Uzbekistan had a population of about 6.5 million people at the beginning of the war, of which 1.5 million have participated in the war. If we consider that more than 500 thousand of them were killed on the battlefields, many returned as disabled, and many - are missing, it is self-evident how expensive was the cost of the victory for us, the President of our country noted.

Magnanimity, generosity and humanism of any people are tested not only in relation to their loved ones, but also to other people, on whose lot sorrows and suffering have fallen, obviously revealed in an effort to provide them help and care.

Compassion and mercy - this is the most noble qualities of our people. Our compatriots have taken nearly one million evacuated children, women and old people. They shared with them the last piece of bread and shelter, have shown the goodness and mercy to them, saying, "You are not an orphan", which was a high expression of the best human qualities of generosity and nobility of our people.

Man, people are alive and eternal thanks to the historical memory, Islam Karimov said. To honor the memory of fallen heroes, give them a tribute - anciently inherent quality of our people. We are indebted to the people who fell on the battlefield in the name of Motherland, for the sake of bright days of future generations, especially in front of the veterans who are still alive, who are worthy of all respect and reverence.

History - This is a memory, the veneration of the glorious deeds of their ancestors, their heroism, the ability to draw the right conclusions from the past.

Given all this, 17 years ago, in our country we announced May 9 as a Day of Memory and Honor, created Memory squares in ​​our capital Tashkent, the Republic of Karakalpakstan, regions and districts, established in these squares monuments of Sorrowful mother. In other words, in this title are the bright reflection of the two complementing each other, inextricably linked noble concepts like memory and reverence.

Over time, life itself confirms how right our decision was. It has become a good tradition of our people to visit these places, providing respect for memory of the fallen. These areas become truly sacred places of worship, have enriched our spiritual life its deepest meaning and content, the head of our state said.

Our people that experienced all the hardships and sufferings of the most terrible and cruel war in the human history, has always lived with one thought: let this evil never happen again. Our compatriots are always asking the God for only one thing: we need peace and quiet.

This desire is deeply rooted in the minds of our people, who has seen a lot in his life, and each of us is clearly aware of the nature and importance, the value of peace and tranquility.

Meanwhile, contradictions and confrontations more and more exacerbated in the world, bloody clashes in the near and far abroad are extremely serious threat and a danger to peace and stability, which disturbs our people.

In neighboring Afghanistan there has been an unstable situation for over 35 years. The growing threats such as extremism, terrorism is a concern of our fellow citizens.

Such a complex and dangerous situation, difficult times, of course, require all of us to always be vigilant and careful, said the President of our country. The motto "Our house - we should take care of it!" today is relevant more than ever. To avoid still encountered indifference and carelessness, the most important thing - to live with a sense of belonging to the events taking place around - is our duty.

Such a difficult time requires from our state and our society to strengthen security, prevent any aggression against our country, necessary measures to ensure the integrity of our borders, protection of the peaceful life of our people.

In this regard, we believe the best decision that in the current difficult situation, we have legislated policies to further enhance the capacity of the Armed Forces of the Republic of Uzbekistan, the Non-Aligned Uzbekistan to any military blocs, to avoid placing on the territory of our country's military bases of other countries, visit our troops outside of the country, Islam Karimov said.

You're a bit of time to a wide and solemn celebration of the 25th anniversary of independence of our country.

Uzbekistan in this historically short period of time, despite the experienced trials and hardships, reached high growth rates achieved enormous successes and milestones that is gaining recognition worldwide and is admired by many, and it pleases us all, awakens in our hearts a sense of pride.

The decisive factor in increasing Uzbekistan's authority in the international arena are impressive results selfless work of our brave and persistent people, its rising political and social activity, changing attitude towards life.

Modern house on standard designs being built on the countryside further enhances the quality of life of our people. As a result of these measures and actions the village is developed and modernized, modern information technologies gain a firm place in the daily lives of our people. This creative work will be continued consistently.

Once again, I appeal to our younger generation, my children: always be motivated, dare, tomorrow, the future is for you! Who tomorrow will come to replace us? It is our own thinking in a new way boys and girls who have mastered contemporary knowledge and professions, capable to take responsibility for tomorrow, to show their potential and opportunities, Islam Karimov said.

Long-term goals and objectives well-planned by us today, including a double increase of GDP of our country by 2030, all of us reinforces our confidence in the future. And, of course, we in no way give in most developed countries, living freely and safely peoples of the world in prosperity, and improving the quality of life of the people.

Taking this opportunity I once again sincerely, with all my heart congratulate our esteemed veterans, all of our people on this remarkable holiday and wish you all health, happiness and prosperity to your homes. Let there always be peace and tranquility, pure heaven in our country, let the Almighty protects our people from all troubles and misfortunes, the President of our country said.

Monument of "Sorrowful Mother" this day was filled with flowers. Representatives of ministries and departments, public organizations laid wreaths to the monument.

The square of Memory till the evening was filled with people who came to pay tribute to compatriots who sacrificed their lives for peace and freedom of the motherland, the bright future of the descendants