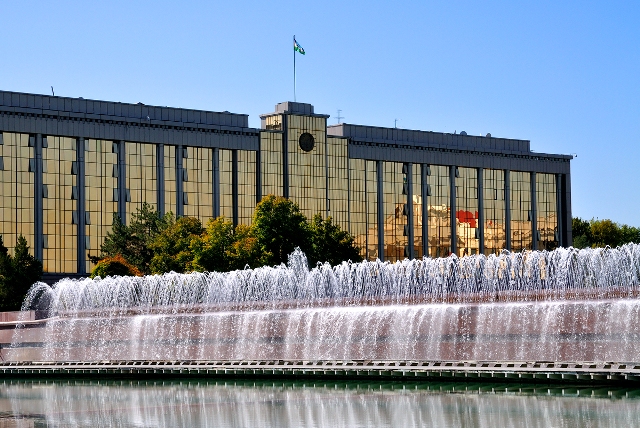 On 14 January an extended session of the Cabinet of Ministers, dedicated to comprehensive analysis of the results of social-economic development of the country in 2016 and determining the most important directions and priorities of economic and social program of the government in 2017 was held in Tashkent.

The chairmen of the Legislative Chamber and the Senate of the Oliy Majlis, state advisors of the President of the Republic of Uzbekistan, members of the government, heads of business associations, public organizations as well the Jokargy Kenes and the Council of Ministers of the Republic of Karakalpakstan, khokims of regions, cities and districts attended the session. For the first time, senior officials at local khokimiyats, territorial departments of ministries, agencies, enterprises and entrepreneurs took part at the governmental meeting through videoconferencing, organized at the regional, city and district centres.

President of the Republic of Uzbekistan Shavkat Mirziyoyev delivered a keynote speech at the session.

In his speech, the President underlined that the continuity in consistent implementation of the Uzbek model of development and Program of further reforms, structural transformations and modernization of the country, developed under the leadership of First President of the Republic of Uzbekistan Islam Karimov, ensured maintenance of stable and sustainably high rates of economic growth and macroeconomic balance, increase of the level and quality of life of the population.

During the discussion of the issues, included into the agenda of the meeting of the Cabinet of Ministers, it was highlighted that the gross domestic product of the country increased by 7,8% in 2016. The volume of industrial production grew by 6.6%, contractual construction works –12.5%, retail trade – 14.4% and services – 12.5%. The State Budget was executed with a surplus at 0,1% to GDP. The surplus in foreign trade turnover has been secured. The inflation rate has not exceeded forecast parameters and constituted 5,7%.

Over 16,6 billion US dollars or 9,6% more than in 2015 were invested into the economy. The volume of foreign investments and loans increased by 11,3% and exceeded 3,7 billion US dollars. The realization of 164 large investment projects with a total cost of 5,2 billion US dollars were completed, including production of new T-250 car model at GM Uzbekistan JSC, enhancement of the cement plant in Djizak region, construction of two steam-gas installations with a total capacity of 900 MWt at the Talimarjan power plant and energy block of burning high-ash coal with a capacity of 150MWt at the Angren power plant.

A new Angren-Pap electrified railway line was constructed with a unique 19 km long tunnel through Qamchiq mountain pass, which connected Fergana valley regions with other regions of the country through a reliable transport link. Afrosiyob high-speed passenger trains started to travel from Tashkent to Bukhara.

The program measures on modernisation and diversification of agriculture under implementation ensured the growth of agricultural output by 6,6%, including of fruits and vegetables – 11,2%, potatoes- 9,7%, melons- 10,5%.

The measures on comprehensive support and protection of private property and entrepreneurship contributed to creation of around 32 thousand new small businesses in 2016, or 18% more than in 2015. The small businesses’ share in GDP of the country increased to 56,9%, and in industry to 45%.

Thanks to positive structural transformations and high rates of economic growth the real income of population increased by 11%. The salaries of workers of the budget organizations was raised by 15%, pensions and social benefits – 12,1%. Around 726 thousand people have been newly employed, including 438,5 thousand graduates of educational institutions.
Within the framework of the State program “Year of healthy mother and child” a wide complex of measures on strengthening healthcare of mothers and children, formation of healthy and harmonically developed generation was implemented, for funding of which over 8 trillion soums and 212 million US dollars were directed.

The President of the country, analysing in detail and comprehensively the existing unsolved problems and partial utilisation of reserves, explicated his proposals on key strategic tasks and important priorities of economic and social program of the country for 2017. Among priority tasks, a central role is attached to development of permanent, open dialogue with population within the framework of implementing the State program “Year of dialogue with people and human interests”, continuation of active social policy, directed towards further improving the level and quality of population, their material welfare.

The government, heads of ministers, agencies, business associations and local governance bodies were assigned concrete tasks on eliminating the shortcomings in the development of the spheres and territories, as well as development and realization of the complex of measures, on continuing active investment policy, strengthening protection of rights and interests of entrepreneurs, gradual decrease of the role of state in managing the economy and cardinal improvement of the work of the governmental bodies.

The president underlined the most important tasks and measures on realization of newly adopted targeted programs on construction of affordable housing, development and modernization of road-transport, engineering-communications and social infrastructure, ensuring improvement of the quality of life of the population in city and rural areas.

The reports of the Prime Ministers of the Republic of Uzbekistan, his deputies, heads of several ministries, agencies and business associations, as well as the Chairman of the Jokargy Kenes of the Republic of Karakalpakstan, khokims of regions and Tashkent city have been heard during the discussion of the issues on the agenda of the session.

For admitted failures and deficiencies and lack of initiative, some officials were warned of personal responsibility for quick elimination of shortcomings, as well as ensuring the effective implementation of the tasks for the further intensive development of industries and regions of the country.

The President of the country laid the following priority tasks and requirements before the government, heads of ministries, agencies, business associations and khokimiyats:

first – development of complex measures on eleven priorities of economic and social program for 2017;

second– ensuring critical analysis of state of affairs in the spheres of the economy, social sphere and regions of the country on a systemic basis, making amendments on this basis to main directions and priorities of deepening the economic reforms;

third– increasing personal responsibility of the heads and senior officials for end results, their compliance with strict discipline and strengthening effectiveness of the management system in accordance with increased modern requirements.

Following the discussions, a governmental decision was adopted, which determines the practical measures on ensuring implementation of most important directions and priorities of the program of social-economic development of the country for 2017.