First Deputy Director of the ISRS Akramjon Nematov: Initiative of the President of Uzbekistan is a logical continuation of a consistent friendly policy towards Afghanistan 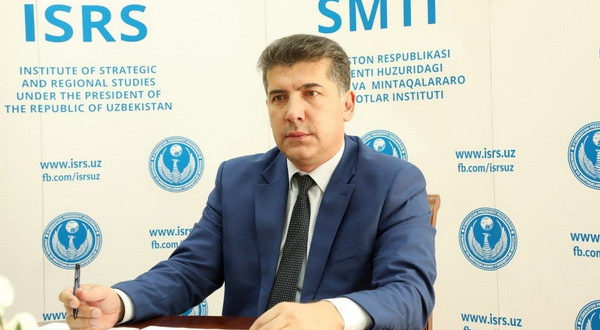 First Deputy Director of the ISRS Akramjon Nematov: Initiative of the President of Uzbekistan is a logical continuation of a consistent friendly policy towards Afghanistan

Yesterday during the regular meeting of Shanghai Cooperation Organization’s Council of the Heads of State in videoconference format, President Shavkat Mirziyoyev proposed to develop and adopt, within the framework of the practical implementation of the Roadmap for further actions of the SCO-Afghanistan Contact Group, a Plan for the Social and Economic Reconstruction of Afghanistan.

“Dunyo” IA addressed with a request to the First Deputy Director of the Institute for Strategic and Regional Studies under the President of the Republic of Uzbekistan Akramjon Nematov to comment on this initiative.

- The proposal of the President of the Republic of Uzbekistan Shavkat Mirziyoyev to develop and adopt a Plan for the socio-economic reconstruction of Afghanistan as part of the practical implementation of the Roadmap for further actions of the SCO-Afghanistan Contact group will serve for further consolidation of the SCO countries’ efforts in promoting the long-awaited peace in Afghanistan.

The initiative of the President of Uzbekistan Shavkat Mirziyoyev once again confirms the firm commitment of the Republic of Uzbekistan to achieving long-term and sustainable peace in the neighboring country, and is a logical continuation of a consistent friendly policy towards Afghanistan.

Being convinced that the security and economic prosperity in the entire vast SCO region are inextricably linked to peace and stability in this long-suffering country, Uzbekistan has always supported the Shanghai cooperation organization to play an important role in resolving the conflict in Afghanistan.

In 2004 Uzbekistan as a chairman to SCO invited former Afghan President Hamid Karzai to the Organization's summit in Tashkent. Since then, leaders of the Islamic Republic of Afghanistan have been participating every SCO summit. And as a logical continuation, Afghanistan received the status of an observer state in SCO in 2012.

It is symbolic that the initiative to establish the SCO-Afghanistan Contact Group, formalized during Beijing summit in November 2005, was announced in Tashkent during the summit of the SCO states leaders in 2004.

In addition, and most importantly, the regular dialogue within the Contact Group contributed to the development of a regional consensus in the SCO space on the basic principles for resolving the situation in Afghanistan, which, in turn, today plays a decisive role in the formation of common approaches of the international community regarding peacebuilding in the Islamic Republic of Afghanistan.

The consensus in the SCO space was enshrined in the «Road Map» of the “SCO-Afghanistan» Contact Group adopted in June 2019 in Bishkek, where all SCO member states declared their commitment to the key principles of resolving the situation in Afghanistan. It was noted that there is no alternative to resolving the conflict through political dialogue and the implementation of an inclusive peace process led by Afghans themselves. There was also highlighted importance of rebuilding the afghan economy for establishing peace and stability in the country, provision of security and sustainable development of the region as a whole.

The Road Map has become an important political document that also confirmed the readiness of the SCO member states to support the efforts of the government and people of Afghanistan in such areas as ensuring peace, security, cultural and humanitarian development and economic reconstruction of the country.

In this regard, the adoption of the Plan for the socio-economic reconstruction of Afghanistan will undoubtedly open a new page in the SCO's afghan policy and will make it possible to put into practice the implementation of the Roadmap of the SCO-Afghanistan Contact group.

First, uniting efforts within the SCO to help Afghanistan restore a peaceful economy through the implementation of social, economic and humanitarian programs and projects will help to achieve a long-term and sustainable peace in this country, to create the necessary socio-economic base for a peaceful solution to the afghan crisis. Consequently, there will be created alternative sources of income for the population, as well as the necessary incentives for the transition of the afghan people to a creative and peaceful life.

Secondly, consolidated regional support to Afghanistan in economic development will have an important role in maintaining the capacity of the government of Afghanistan to fulfill its social obligations to the population, meet the urgent needs of citizens for stability and security, and ensure peaceful development in the post-conflict period.

The creation of a viable afghan economy will guarantee the continuation of reforms that began 19 years ago in the area of rule of law, protection of human rights, strenghtening democratic institutions, civil society and modernization of public administration.

Third, the implementation of joint projects within the framework of the SCO will serve both stabilization of the situation in Afghanistan and restoration of the role of this country as a key link in ensuring the interconnectedness of the Eurasian continent. This, in turn, will further strengthen the consensus in the SCO space on the need to achieve further peace in Afghanistan. In addition, the effective implementation of the Plan for the socio-economic reconstruction of Afghanistan can become an exemplary model of multilateral interaction, turning the IRA into a platform for cooperation and opportunities.

Moreover, the initiative of Sh.Mirziyoyev creates an opportunity to strengthen the important role of the SCO in the practical solution of the afghan issue. To date, there are many different platforms and formats for resolving the situation and economic reconstruction of Afghanistan, but their potential for objective and subjective reasons remains untapped in full.

In this context, the SCO is a unique structure where almost all countries that are interested in resolving the Afghan problem are represented: Central Asian States, China, Russia, Pakistan, India (full members), Iran (observer), and Turkey (dialogue partner).

It should be noted that the SCO has sufficient potential to make a significant contribution to restoring the peaceful economy of Afghanistan and achieving long-term and sustainable peace in this country. Currently, the total share of the SCO member countries' GDP in the structure of world GDP is 22.5% ($18.4 trillion). This figure is expected to reach 40% in 2030. Moreover, in terms of foreign direct investments, the top twenty major investors include such SCO member countries as China (2nd place, FDI volume- $203.4 billion) and India (15th place, $41.2 billion).

Today the SCO countries are actively involved in supporting the afghan people in their quest for peace and prosperity. Thus, the SCO member States are among the main trade partners of Afghanistan. In 2019 the volume of Afghanistan trade with SCO countries amounted to 54% ($6 billion) of its total trade turnover ($11 billion) with foreign countries.

If we take into account Afghanistan's trade with the other SCO participants-Iran (observer, $ 2.5 billion) and Turkey (dialogue partner, $ 150 million), the figure will be 82.7%. In turn, the SCO space is the main market for afghan products. Thus, in 2019, the share of the Organization's participants in the total volume of exports of Afghan goods ($728 million) was 94.5% ($688 million).

Special attention should be paid to the fact that the SCO member states provide significant assistance in ensuring the energy and food security of the IRA, covering more than 80% of electricity needs and more than 20% of food wheat and flour.

In general, the proposal of Uzbekistan to adopt the Plan for the socio-economic reconstruction of Afghanistan fully corresponds to its main tasks, which involve joint provision and maintenance of peace, security and stability in the region, strengthening mutual trust and good-neighborliness among the participating countries, and promoting their effective cooperation in the political, trade, economic and cultural fields. At the same time, the practical implementation of the Plan for the socio-economic reconstruction of Afghanistan will strengthen the economic component of the SCO, bring together the positions of the member countries in priority areas of restoring the country's peaceful economy, and also contribute to more active involvement of the IRA in regional trade and economic processes. The SCO's active participation in stabilizing the situation in Afghanistan will strengthen the organization’s potential and enhance its status as a responsible multilateral structure that makes a significant contribution to regional and international security.