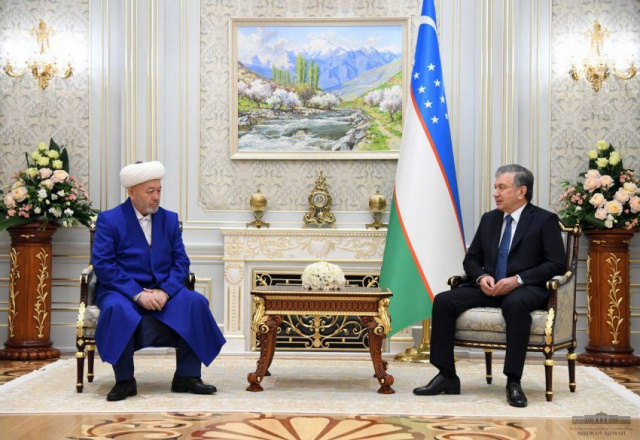 On January 6, President of the Republic of Uzbekistan Shavkat Mirziyoyev received the Chairman of the Muslim Board of Uzbekistan, Mufti Usmankhan Alimov, and sincerely congratulated him on his 70th birthday.
The Head of the state noted the activities of Usmankhan Alimov in reviving national and religious values, studying and promoting the rich heritage of great scientists and thinkers, strengthening inter-religious tolerance in society.
It was emphasized that the Head of the Muslim Board of Uzbekistan is one of the most respected religious figures not only in the country and Central Asia, but also throughout the world, his election as a member of the constituent assembly of the World Islamic Countries Union and the World Ulema Council, as well as the inclusion in the list of 500 most influential Muslims of the world is a matter of pride for all the people of Uzbekistan.
“We know and value Mr. Mufti as the tireless enlightener of Islam. Such works as “Tafsiri Irfon”, “Imam Bukhari – the Sultan of Muhaddith”, “Parenting in the family” took a deep place in the heart of our people”, the Head of the state said.

The President of the Republic of Uzbekistan awarded the Chairman of the Muslim Board of Uzbekistan, Mufti Usmankhan Alimov, the El-Yurt Khurmati Order (Respected by people and homeland) in recognition of his significant contribution to the development of Islamic culture and science in the country, the study and widespread international promotion of the humanistic essence and good ideas of the religion of Islam, priceless scientific heritage of great scientists and thinkers, for his service in ensuring the stability of the socio-spiritual situation in society, strengthening interethnic harmony, exemplary activity in training specialists with deep religious and secular knowledge, educating the young generation in the spirit of love for the motherland, generosity and respect for national values.
Usmankhan Alimov thanked President Shavkat Mirziyoyev for the high award and noted that in recent years, profound reforms, along with all spheres of society, have been carried out in the religious and enlightenment field. The Mufti voiced his readiness to actively promote large-scale work on the study of the religion of Islam, the revival and bringing the heritage of their ancestors to the future generations.
It was emphasized that the Muslim Board of Uzbekistan and representatives of the religious sphere consider it their duty to actively participate in ensuring social and spiritual stability in the country, enlightenment work aimed at educating young people in the spirit of the ideas of humanism, tolerance, peace and harmony.

It was noted that the systemic reforms carried out at the initiative of President Shavkat Mirziyoyev to prepare worthy successors of the great ancestors, improve the religious education system in the country, and conduct a deep, scientifically sound study of the religion of Islam as a truly humane and virtuous religion are highly appreciated by Uzbekistan people and the international community.
Close