Shavkat Mirziyoyev: Our courageous and persistent people remain faithful to the chosen path of independence 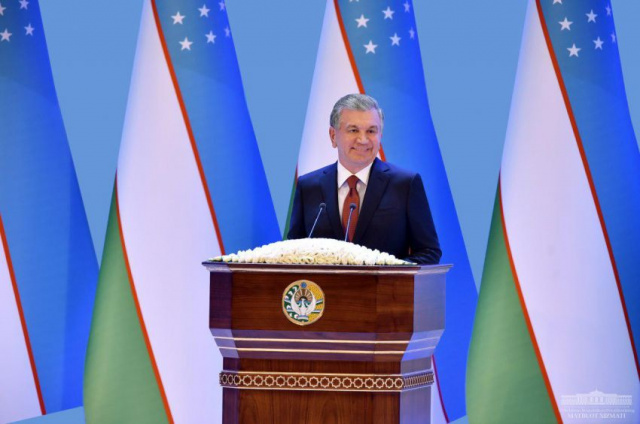 Shavkat Mirziyoyev: Our courageous and persistent people remain faithful to the chosen path of independence

The Palace of International Forums “Uzbekistan” hosted celebrations on the occasion of the 28th anniversary of the state independence of the country.
The President of the Republic of Uzbekistan congratulated the participants of the event, all the multinational people on Independence Day.
Twenty-eight years ago, the First President of the country Islam Karimov announced the independence of Uzbekistan. This day, which became the starting point for realization of aspirations and achieving success on building a free and prosperous life, has become the greatest, the dearest holiday of our people. Over the past period, Uzbekistan has passed a difficult, full of trials development path.
“Today we have every reason to say with great pride: our courageous and persistent people, despite the most difficult trials, showed unbending will and remained faithful to the chosen path of independence. Uzbekistan has decisively entered a new stage of its development”, the Head of the state said.
Uzbekistan, following the priorities identified in the Action Strategy, is confidently moving from a national revival to national progress. Thanks to democratic reforms, the country has taken its rightful place on the world stage and is implementing an active foreign policy.

“Whatever reforms we carry out today, no matter what new projects we implement, all of them are aimed at achieving the single, most important goal for us. It consists in providing decent living conditions for our noble and hardworking people, to justify the confidence of compatriots, successively solving all their problems”, the President said.
The Head of the state dwelt on the essence and results of ongoing activities on improving the judicial-legal system, transition to a real market economy, support for entrepreneurship, modernization of industry and agriculture. Formation of a unique system of social development, paying much attention to development of regions, improving the quality of life of the population, harmonious education of the young generation was noted.
“I want to emphasize that today the democratic process in Uzbekistan have become irreversible. I consider it necessary to firmly state: in the name of the memory of our ancestors, who gave their lives in the struggle for these bright days, in the name of our 33 million people, our children and grandchildren – we will never turn the path of independence! We will certainly achieve our goals – together we will build the great future of our homeland!”, said Shavkat Mirziyoyev.
The festive event continued with a concert performed by masters of art and young artists.