What secrets are kept by the Uzbek skullcaps? 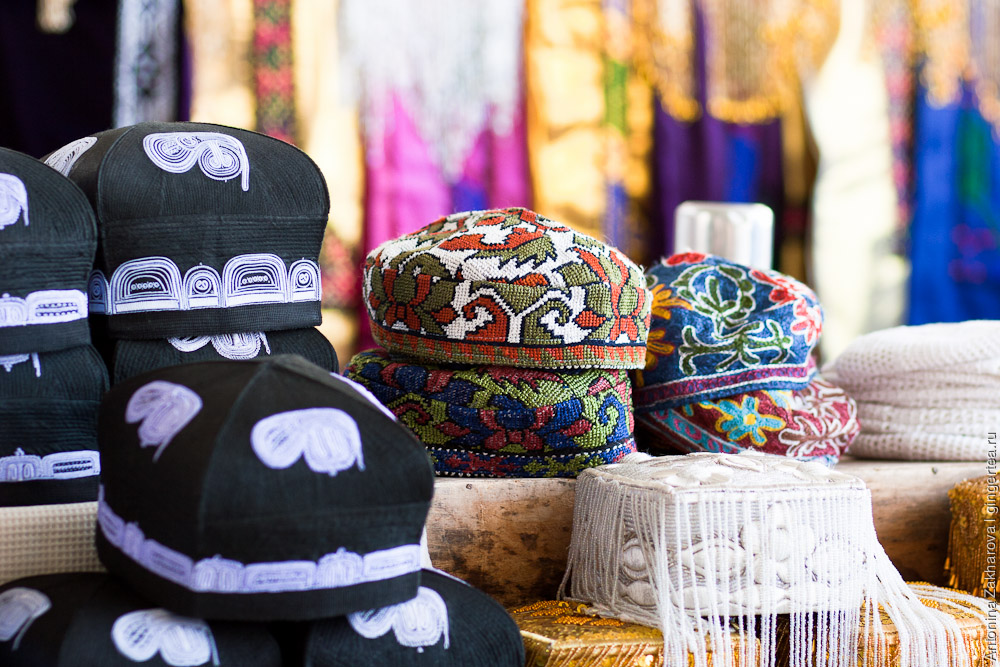 What secrets are kept by the Uzbek skullcaps?

But a few decades ago a skullcap was a main type of a headdress in Central Asia. It used to be worn by men and women, children and old men. Moreover a skullcap has its own difference in each region. Skullcaps (Duppi) conditionally divided into several groups: Tashkent, Bukhara, Samarkand, Fergana, Khorezm and Karakalpak, Kashkadarya – Surkhandarya styles, skullcaps are also of festive, religious and daily wear. These national caps are made of soft or hard fabric, decorated with embroidery or beads and given a round or square shape.

Duppi (skullcap) is of  a special respect with men. At earlier times during the disputes of men quite often they used the expression - "Have you got a skullcap on your head? ", what meant - "A man you are or not? ". A skullcap can tell a lot about its owner. Today, however, not everyone thinks about the messages hidden in the patterns of duppi, and after all each bend, drawing the line bear in itself a deep meaning and mystery. So far, the people have preserved entire legends about skullcaps. According to the legend four flowers in the top part of a skullcap are drawn to protect the health of a man from four sides and sixteen flowers on the edge of skullcaps express the wish of a  big and happy family (to have sixteen children) as reported in the album "Skullcaps of Uzbekistan of the XIX-XX Centuries". It is well illustrated by one of the most widespread classic skullcaps of men. These duppi native of Ferghana Valley but have become popular throughout the country. They have a strict, modest and at the same time very decorative look.

For these skullcaps typical contrasting combination of white pattern in the form of four peppers "kalampir" with a black background is characteristic. Embroidered white silk flowers on a dark background would have served as an expression of purity of heart and soul of the man.
However it is impossible to claim unambiguously that on this headdress the plant is depicted. Some researchers see echoes of the certain cosmogonic ideas  in it coming from the time immemorial.

When decorating skullcaps vegetable character of the embroideries are mainly used the color of which was achieved by contrasting color palette of floral and leafy pattern pieces. Those plants which possessed any healing powers along with their decorative value possessed any salutary force and used in the treatment of various ailments were represented in decorations. Among the floral motifs a rose, an iris, a carnation, a tulip, a cockscomb, an apple-tree flower, etc., and among fruits - images of pomegranate, cherry and sweet cherry, almonds and pepper, etc. are widespread.
However prototypes of flower forms every time changed by the imagination of skilled workers. Floral forms of an ornament were chosen stylized form, in a flat manner, generally. The flowers are shown at the top and sideways.
Especially details inside the flowers are designed carefully. In an ornament of embroideries leaves of several forms can be met: oval, with serrated edges reminding lilac leaves; shamrocks and cinquefoils of different outlines, long leaves "fir-tree", leaves with a teeth on one side.
Floral patterns often enlivened bright colorful byimages of birds. Birds could also make  the main pattern of ornamental motif. Basically, it is the image of pheasant, rooster, nightingale. Figures of birds are solved brightly, decoratively, they are organic are united on the style with an ornament.
Among zoomorphic motifs the image of the character used, for example, the motif of horns symbolizes the strength, courage and protection. Under a pattern with ram horns, especially the spiral one, there also suggested an ancient cosmological spiral motif symbolizing the universe, eternal movement. In an ornament of skullcaps the image of a coiling snake is widespread. It is possible to assume that the idea of the magic strength of a snake was connected with a cult of snake in the past the traces of worshipping which are traced up to now.
Snake (Ilon) used to be attributed by many positive features. It was considered as the protector of a house, a family, wealth, cattle, grain, water, treasures, etc. It was revered as patron of women and children, especially infants. The pattern "Ilon izi" (serpent’s trace), common in embroidery lace according to mythological tradition also served as a talisman.
On skullcaps  also images of a mountain goat, a scorpion, an animal reminding a leopard are embroidered. Images of animal paws or bird's traces are widespread. Traces of an animal specified a way to water thus to life.
The pattern richness of skullcaps is reached  by means of color too. The following colors and shades were applied: "oq" (white), "qora" (black), "och-kuk" (light blue), "sawsan" (violet, namely iris), "bikya" (bright pink), "zeynobi" (warm green), "Tutaki" (cold green , parrotlike, derived from "tooty" - a parrot), "sariq" (yellow), "pushti" (dark and crimson), "shol" (red, literally woolen).
Integral part of the decoration is skullcaps braid -''zhiyak ",   "jiyak" in some provinces called "zeh" (Bukhara, Urgut, Samarkand),"Sherozi" (Surhandarya). "Zhiyak usually framed like a skullcap and protects the wearer from evil eyes.

The more fragrant, the more delicious: the secret of uzbek cuisine?
Uzbek cuisine is unthinkable without the aromatic herbs and spices, creating a whirlwind fragrant, even over the most common dish
Read more
Music from the past: unique patterns of Maqom
They say the most universal language is the language of music. Coming from time immemorial, it inexplicably embodied the strength of the people, building and ennobling the soul. Among the peoples of the Ancient East this spiritualized beginning is inherent in traditional classical music-vocal genre - "maqom".
Read more