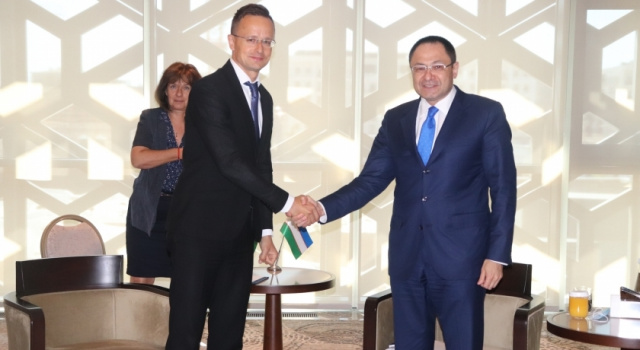 On July 16, 2020, the Chairman of the Chamber of Commerce and Industry of Uzbekistan A. Ikramov met with the Minister of Foreign Affairs and Trade of Hungary Péter Szijjártó.
During the talks, views were exchanged on prospects of Uzbekistan – Hungary relations in trade-economic, investment and other spheres.
The issue of deepening interagency cooperation with the Hungarian Chamber of Agriculture was discussed, as well as the opening by Eximbank of a preferential credit line for $95 million.
At the meeting, Péter Szijjártó noted the special role of the Uzbek side in the planned meeting of the Chambers of Commerce and Industry within the framework of the Cooperation Council of Turkic Speaking States in Budapest.
In turn, the Chairman of Uzbekistan CCI A. Ikramov expressed interest in establishing cooperation in all the discussed areas, including training in trade.
Following the meetings, the parties agreed to sign an Agreement on establishment of Uzbekistan – Hungary Business Council in November this year.