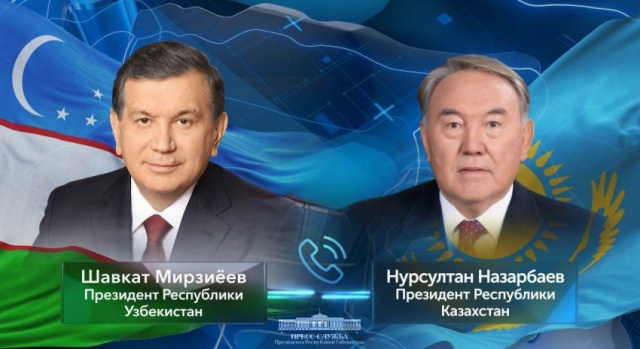 On November 19, the President of the Republic of Uzbekistan Shavkat Mirziyoyev had a telephone conversation with the President of the Republic of Kazakhstan Nursultan Nazarbayev.
The heads of states noted with deep satisfaction the dynamic development and consistent strengthening of friendship, good-neighborliness and strategic partnership between the two fraternal countries.
It was emphasized that intensification of contacts at all levels and in all areas contributes to further deepening Uzbekistan – Kazakhstan multifaceted cooperation.
The trade turnover and cooperation in various sectors of the economy, including between regions and business circles, increases. On November 15 this year, the first Interregional Cooperation Forum was successfully held in Shymkent with participation of heads of administrations of border areas and leading companies of the two countries.
A rich program of business, cultural and humanitarian exchanges within the framework of the Year of Uzbekistan in Kazakhstan was noted: in total, more than 50 joint events were held since the beginning of the year.
The heads of states discussed prospects of practical cooperation in the context of implementing agreements at the highest level, as well as reviewed the schedule of upcoming events.
Views were exchanged on current issues of regional and international agenda, including preparations for the second Consultative Meeting of the Heads of States of Central Asia in 2019, in Uzbekistan.
In conclusion, leaders of the two countries confirmed their firm intention and mutual desire to further actively develop full-scale cooperation, strengthen the centuries-old friendship and good neighborliness, bilateral strategic partnership for the benefit of fraternal people of Uzbekistan and Kazakhstan, in the interests of ensuring stability and sustainable development of the entire region.