Tasks for further development of the road sector are identified 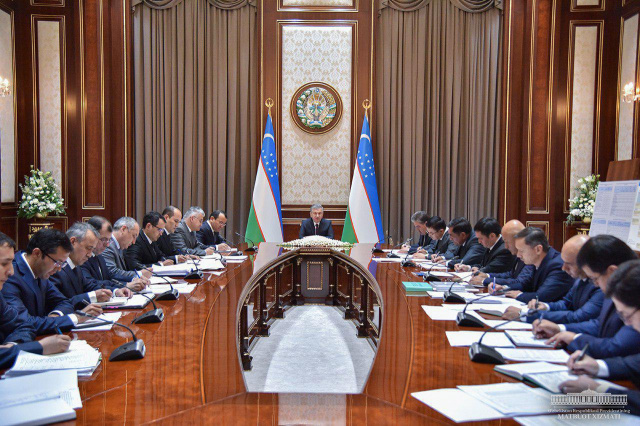 Tasks for further development of the road sector are identified

On October 2, President of the Republic of Uzbekistan Shavkat Mirziyoyev held a meeting on the issues of development of the road sector and wide attraction of investments in this sphere.
In our country, 98 percent of all cargo and 88 percent of passengers are transported by road. In recent years, the share of finished products in domestic exports has been increasing, which will continue to increase. Developed road infrastructure is needed for fast and qualitative delivery of goods.
Issues of development of the sphere, stable financing of road construction projects were discussed at the meeting.
The need was noted for active involvement of international organizations and private partners in construction and repair of roads. In particular, instructions were given on implementation of 18 major projects based on such a partnership, covering 1.6 thousand kilometers of roads of international and national importance.
Insufficient participation of regions in the repair of internal roads was indicated. The Ministry of Finance was entrusted with the task of introducing a procedure according to which the funds of the republican budget will be allocated only to public roads, and the funds of local budgets – to internal roads.
It was noted that in foreign practice of road construction, public-private partnerships (PPPs) have proven themselves well. Investors in public-private partnership projects can be attracted by passing them roadside infrastructure facilities.
Responsible persons were instructed to develop a procedure for placing roadside facilities within the framework of PPP projects and their operation.
The authority for issuing permits for advertising on public roads was proposed to be transferred to the Committee on Roads.
It is also necessary to organize a working group on reforming the road sector from among the representatives of relevant ministries and agencies and develop a Strategy for Development of Roads for 2020-2030. It will primarily determine measures on improving the road management system.
Currently, the Committee on Roads performs the functions of both the customer, the contractor, and the operator, as a result of which enterprises in the sphere cannot participate in international projects. In this regard, it is planned to withdraw construction organizations from the committee system and organize the Uzavtoyul JSC on their basis. Much attention will be paid to construction of high-speed highways with participation of private partners.

The Head of the state pointed out that activities on improving the quality of roads should be started with design. The number of design organizations should be increased, their material and technical base and staff should be strengthened.
The need was noted for creation, together with German partners, of a design institute for road construction, revision of normative acts in road construction, taking into account the climate and traffic of the country. For example, in construction of roads in the country, asphalt concrete pavement is still mainly used. The lifespan of such roads is 10-15 years, they need to be repaired already after the first 4-5 years of use. Although cement-concrete coating is more expensive to 15-20 percent, the service life is 2-3 times longer, and the cost of maintaining such roads is three times less compared to asphalt.
Taking into account the growing volumes of cement production in the country, it has been instructed to gradually transfer the newly constructed and reconstructed roads of national importance to cement concrete pavement.
Another problem is the lack of an automated road monitoring system. The movement of vehicles carrying goods with a weight exceeding the permissible load capacity of the road is not controlled.
In this regard, the importance of forming an electronic database of all roads, developing a program for installing special measuring instruments was noted at the meeting.
Instructions were given for the design of roadside infrastructure at the level of world standards with the involvement of foreign experts, organization of qualitative service on international roads.
The fact that a number of road bridges and overpasses are in need of repair, and some even abandoned, was criticized. The task was given to conduct an inventory of all bridges, to develop a targeted program for their repair and restoration.
Special attention was paid to personnel issue. The need for consolidating large-scale projects for specialized institutes, organization of test sites and research laboratories for scientists, advanced training of gifted students abroad was noted.
Responsible persons provided information on tasks set at the meeting.