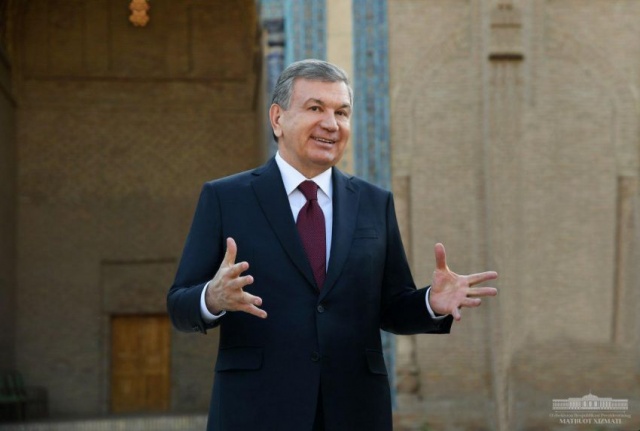 The President of Uzbekistan visited the mausoleum of Sultan Saodat near Termez. Surahs from the Holy Quran were recited.
This shrine constitutes an ensemble of mausoleums dating back to the 10-17th centuries. It is believed that Sayyid Hassan al-Amir, a fifth generation descendant of Prophet Muhammad’s daughter Fatima and his son-in-law and associate Ali. He became famous as the “Sultan of Sodot” (“Sultan of Seyyids”), found last refuge here. Later on, his descendants and other seyyids were buried on the site.

According to scientists, allegedly in 865, Hassan al-Amir settled with his relatives in Termez and gave rise to an influential Seyyid dynasty. In the Middle Ages, the Termez Seyyids played important role in the social and political life of various countries, particularly in the state of Amir Temur. Sahibkiran and the Temurids, who paid special attention to worshiping the descendants of the Prophet, built mausoleums and chapels here. The tombs that appeared in the following centuries were built in the architectural traditions of their time. In this regard, the complex has great historical, spiritual and cultural significance.

As reported by the Press Service of the President of the Republic of Uzbekistan, the President pointed out that this venue constitutes a unique spiritual heritage, a sacred place for Muslims, therefore it is vital to thoroughly study its history, bring it to the people and foreign public. The Head of the state gave instructions on landscaping the complex on the basis of archaeological research, turning the shrine into an enormous and fine-looking pilgrimage site like the mausoleums of Imam Bukhari and Imam Termizi.
Shavkat Mirziyoyev also visited the mausoleum of Hakim Termizi. Prayer with wishes of peace and prosperity for our nation was read out.