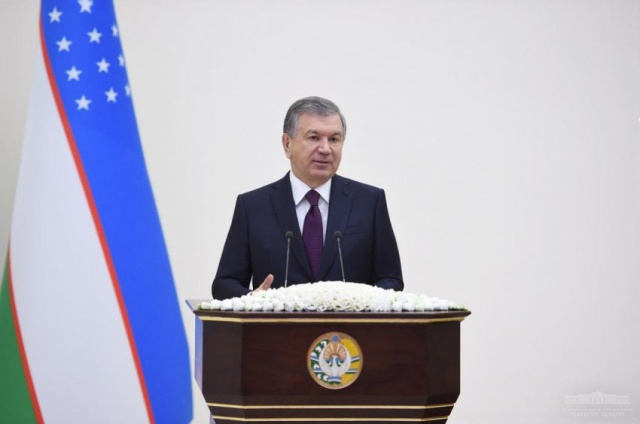 Termez hosts an extraordinary session of Surkhandarya Regional Council of people’s deputies.
President of the Republic of Uzbekistan Shavkat Mirziyoyev proposed to hold the session in the form of an open dialogue.
– The one who talks about the true state of affairs is our friend. May our meeting be useful in that it will put all the issues in its place, – the Head of the state said.
The President noted that even one tenth of Surkhandarya region’s potential, which is rich in minerals, has natural conditions, which allow to collect up to three harvests per year, is not utilized. It was indicated that the gross regional product per capita is 2.3 times, the provision of services is 2 times, production and exports of industrial products are 8 times lower than the average for the country. The fact that 10 percent of the economically active population of the region is unemployed, the level of provision with clean drinking water is 54 percent has been criticized.
A program designed for 2019-2020 has been developed to eliminate these and other problems. It envisages the implementation of 649 investment projects worth 23 trillion 632 billion UZS. It is planned to allocate 2.2 billion dollars of foreign direct investment and create 11.5 thousand jobs.
In addition, a concept of integrated development of the region until 2030 is being developed on the basis of a deep study of the features and capabilities of Surkhandarya.
President Shavkat Mirziyoyev identified priorities for attracting foreign investment in the region, creating modern enterprises and new jobs, increasing incomes of the population and local budgets.