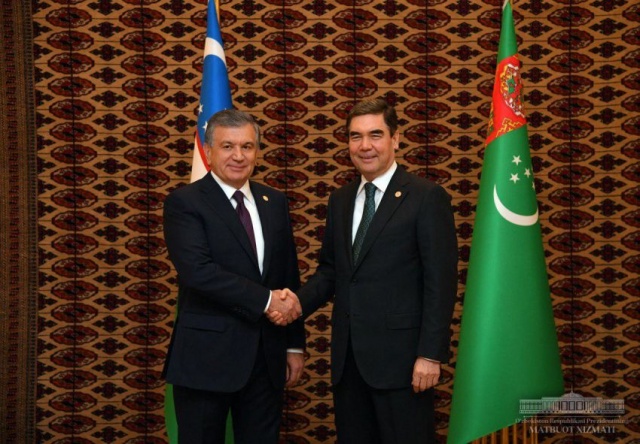 Turkmenbashi, August 24. Special correspondent of UzA Matnazar Elmurodov reports.
The President of the Republic of Uzbekistan Shavkat Mirziyoyev met with the President of Turkmenistan Gurbanguly Berdimuhamedov in Avaza tourism zone of the city of Turkmenbashi.
Uzbekistan – Turkmenistan relations are developing rapidly. An important role in this first of all is played by sincere friendship, mutual trust and support between the heads of the two states.
Regular summits testify to the actively developing interstate relations. Thus, the state visit of the Head of Turkmenistan to Uzbekistan in April this year gave a new dynamic to cooperation between the two countries.
The current meeting of the heads of states has become a logical continuation of a mutually beneficial, fruitful and active dialogue.
Gurbanguly Berdimuhamedov welcomed the President of Uzbekistan in the Turkmen land and noted that the summit of the heads of the Founder States of the International Fund for Saving the Aral Sea is a good opportunity to discuss both bilateral and multilateral cooperation.
Shavkat Mirziyoyev highly appreciated the initiatives implemented during Turkmenistan’s chairmanship in the International Fund for Saving the Aral Sea and noted that the projects and efforts of Uzbekistan and Turkmenistan in this sphere complement each other.
The current state and prospects of bilateral cooperation was discussed at the meeting. It was noted that the state visit of the President of Turkmenistan to Uzbekistan in April of this year brought the multifaceted cooperation to a qualitatively new level.
Attention has also been paid to implementation of the agreements reached earlier. Issues of strengthening relations of strategic partnership, development of cooperation in political, trade-economic, transport-communication, industrial, cultural-humanitarian and other spheres have been considered.
The sides exchanged views on the issues of regional and international agenda, which are of mutual interest.