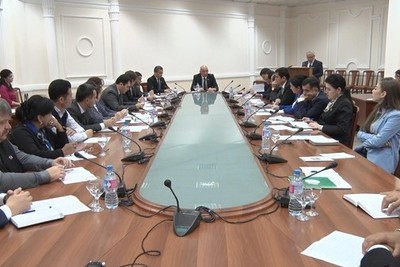 On November 8, the Legislative Chamber of Oliy Majlis of Uzbekistan held a seminar titled ‘Ensuring freedom of speech and information during the election: Uzbekistan’s experience’, organised by the Chamber’s Information and Communication Technologies Committee.

The attendees discussed Uzbekistan’s successes in the democratising election process; creating legal and technical framework for freedom of speech and political pluralism; and media participation in ensuring elections’ transparency.

The event was attended by the Chamber’s deputies, scientists and experts in IT and election process, journalists, and representatives of NGOs and other institutes of civil society. Speakers said the conditions for exchange of public opinion, effective work of media and transparency of election subjects ensure a democratic, transparent and just election. The freedom of expression and choice is based on the freedom of information.

To this end, over the years of independence Uzbekistan has seen great success in democratising and liberalising information and securing freedom of speech and information during elections, on the basis of a high-standard legal framework in this field.

The legal framework in Uzbekistan ensures a just and pluralistic election process, based on the Laws “On Mass Media”, “On Protection of Professional Activity of Journalist”, “On Guarantees and Freedom of Access to Information”, “On Principles and Guarantees of Freedom of Information”, “On Ensuring Transparency of Activity of Public Administration Authorities”, and “On E-government”. The two latter laws help legal entities and individuals access information in the possession of state authorities.

Speakers said mass media is a subject of democratic process and plays a political role during elections. The media informs the electorate, delivers election campaign material, and serves as a tool of public supervision. Over the years of independence, national mass media has seen considerable development and played a vital role in the coverage of elections. At present, there are 1463 media outlets, including print and broadcasting media and information agencies. The number of online media outlets has reached 380, with publications made in Uzbek, Russian, and 7 international languages.

Participants heard reports on journalistic work in comprehensive election coverage and the vital role of ICT in ensuring election transparency. They said the number of active .uz domains has reached 29.7 thousand, with an average of 27.7m people visiting .uz websites every month. Around 54% of all entries have been made through mobile devices.

Development in telecommunications helped double internet traffic capacity to 80 GB/s and speed up internet access to 41.9 GB/s (a 193% growth). The price of accessing internet channels was reduced by 49%, bringing the number of internet users to 13.069m.

At the end of the seminar, suggestions have been made on improving journalistic efficiency in delivering news to citizens and ensuring transparency of the presidential elections in Uzbekistan.