REGIONAL COOPERATION IS IMPORTANT FOR ELIMINATING CONSEQUENCES OF THE ARAL TRAGEDY 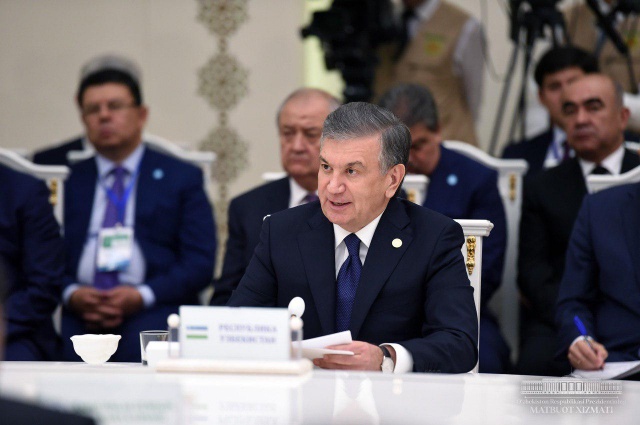 REGIONAL COOPERATION IS IMPORTANT FOR ELIMINATING CONSEQUENCES OF THE ARAL TRAGEDY

After the meeting in a narrow format, a meeting of the Heads of the Founder States of the International Fund for Saving the Aral Sea was held in an expanded format. It was attended by members of the delegations of Uzbekistan, Turkmenistan, Tajikistan, Kazakhstan and Kyrgyzstan, representatives of international organizations and financial institutions, experts for ecology and water management issues.
The President of the Republic of Uzbekistan Shavkat Mirziyoyev addressed the meeting.
The President of Uzbekistan noted that under the chairmanship of Turkmenistan a large-scale activity is carried out on improvement and development of activities of this multilateral structure, raising its international authority. – The current historic meeting of the heads of the founder states of the fund, which takes place after a nearly ten-year break, will open a new page in activities of our organization, will give a powerful impetus to the regional partnership in Central Asia. Today we reaffirm our readiness for cooperation, – said Shavkat Mirziyoyev.
It was noted that consequences of the drying up of the Aral Sea are exacerbated, the desert that has arisen there continues to capture the Aral Sea region, which leads to a shortage of water resources, a decrease in the quality of drinking water, land degradation, a sharp decrease in biodiversity and other serious environmental changes. In this regard, this summit is important for combining efforts to overcome the consequences of this catastrophe and improve the socio-economic situation in the Aral Sea area, to solve the water and environmental problems of the region, taking into account the common interests of our countries.
The International Fund for Saving the Aral Sea is the only regional organization in this direction and today it can become an effective mechanism for cooperation between our countries. I am confident that we will be able to achieve a balance of interests of all countries of the region within the organization, because our common future is in our hands, the Head of the state said. The President of Uzbekistan forwarded important proposals on improving activities of the International Fund for Saving the Aral Sea, attracting innovative solutions and foreign investment in the region, developing a green economy, carrying out scientific research and other issues.
At the meeting, the heads of states noted that ensuring security and stability in Central Asia is directly related to issues of sharing common water resources, weighted solutions in this direction will serve the well-being of the countries of the region. It was emphasized that this problem cannot be solved without taking into account the interests of all countries and people of the region. At the meeting with representatives of the mass media, the Presidents noted that this summit started a new stage in activities of the fund, implementation of proposals forwarded at the meeting will serve to further development of multifaceted relations aimed at improving the life of people of Central Asia.