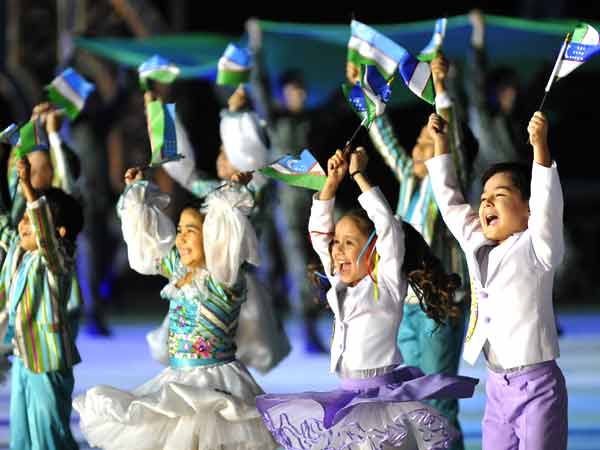 Events were conducted at national and regional levels by the Federation of Trade Unions of Uzbekistan together with concerned ministries and departments with support of International Labour Organization (ILO) and the UN Children's Fund (UNICEF).

According to recent estimates of international organizations, 168 million minors around the world are involved in child labor in the spheres of agriculture, manufacturing, services and construction.

In many cases, according to ILO opinion, child labor is facilitated by such factors as poverty, lack of access to health care, free qualitative education and professional training.

Uzbekistan since the first years of independence considers issues of ensuring children's rights issues, healthcare, qualitative education for children as a priority direction of state policy. Reform of educational system implemented in Uzbekistan, providing for a 12-year compulsory free education for all children in the country, is an effective mechanism to prevent child labor, recognized by the international community.

The fundamental feature of the model, which is implemented in the country, lies in the fact that after 9 years of study in a comprehensive school the next 3 years children are enrolled in professional colleges and academic lyceums, where each of them along with the study of fundamental disciplines receives professional training on 2-3 specialties in demand in labour market.

Today Uzbekistan is one of the few countries in the world, where the average duration of education is very close to 12 years, and the age of completion of compulsory education exceeds 18 years. The country’s expenses for this purpose have an unprecedented scale in the world: the annual costs of the development and reformation of education make up 10-12% of GDP, while their share in the state budget totals more than 35%.

In recent years, a series of measures aimed at preventing child labor, including significant changes to the legislation, have been carried out.

Relevant law has been adopted in order to regulate relations in the field of prevention of neglect and adolescent crime. In addition, the Code of the Republic of Uzbekistan on administrative responsibility was supplemented with regulations establishing a strict liability of officers and other persons for violation of labor legislation and labor protection of minors, the use of their work at jobs that can harm the health, safety or morals, or for forcing minors to work.

Thus, in accordance with Article 241 of the Labour Code the employment of persons under 18 years in hazardous work conditions is prohibited. The lift and movement of weights exceeding the established norms by persons under the age of 18 years is not allowed.

Resolution of the Cabinet of Ministers of May 27, 2014 provides for the development and implementation of specialized training programs in schools (for high school students), lyceums and colleges. The programs are aimed at the study of the rights of minors and regulations of ILO Conventions ratified by Uzbekistan.

In January 2016 the Cabinet of Ministers approved the "Action Plan for the improvement of working conditions, employment and social protection of workers of agricultural sector in 2016-2018". The document envisages a series of measures aimed at preventing child labor. They include organization and conduct of the annual public monitoring of the state of affairs in this area, spread of relevant information materials in educational and medical institutions, shopping malls and other places, display of videos about the most sought-after profession in the labor market, labour rights and guarantees for employment for youth.

In addition, Oliy Majlis holds annually parliamentary hearing on implementation of provisions of the ILO conventions ratified by Uzbekistan.

The General Agreement on socio-economic issues for 2014-2016 between the Cabinet of Ministers of republic, Council of Federation of Trade Unions and the Chamber of Commerce and Industry of Uzbekistan provides a direct determination to the parties' commitment to full compliance with ILO conventions.

On the proposal of trade unions regulations on compliance with the minimum age for admission to employment and prevention of child labor, special provisions guaranteeing respect for the rights and additional guarantees for young people provided by the labor legislation, especially those under 18 years of age, were included in collective-contractual acts.

The organization of summer health improvement of school-age children is an important preventive measure to prevent child labor. This year the work of 1204 children's health camps has been organized, where more than 292 thousand children will rest and improve their health.

Federation of Trade Unions of Uzbekistan conducted extensive advocacy work on the implementation of ILO Conventions on child labor. Materials about the forums and events on this topic are being distributed on a regular basis in print and electronic media of the country.

Ongoing systematic work in this direction ensures the prevention of child labor. In order to consolidate this work the Federation of Trade Unions of Uzbekistan has created the Coordination Council on Child Labour, which consists of representatives of concerned ministries and departments, trade unions, employers' associations and other civil society institutions. Its task is to coordinate the actions on the implementation of measures aimed at preventing child labor, to attract public attention to this issue, as well as develop proposals for the further improvement of the work in this direction.

It is also worth noting that Uzbekistan has introduced a system of training of heads of state authorities in the field and employers. At the initiative of the Federation of Trade Unions all training courses for executives include studies devoted to the study of national and international labor standards, including ILO conventions, with particular reference to the documents on child and forced labor. Considerable attention is paid to information-explanatory work - issue of special booklets, manuals, conduct of parents' meetings, which provide increased awareness of both parents and their children.