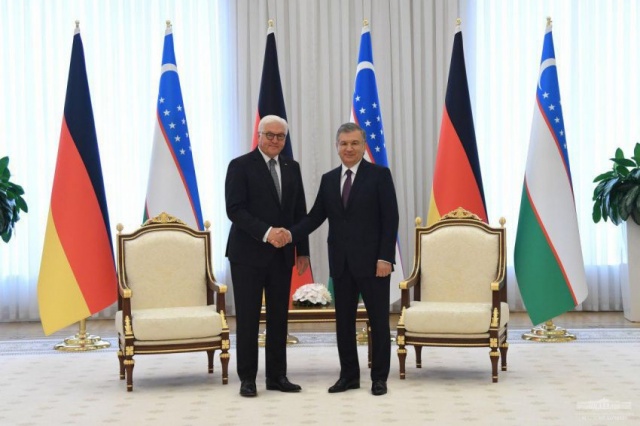 President of the Republic of Uzbekistan Shavkat Mirziyoyev and President of the Federal Republic of Germany Frank-Walter Steinmeier have held talks in contracted and extended formats.
The Head of the state sincerely congratulated the President and people of Germany on the 70th anniversary of the adoption of the Basic Law and establishment of the Federal Republic of Germany.
The Federal President of Germany thanked Uzbekistan’s leader for the invitation to visit our country and the warm welcome. Frank-Walter Steinmeier expressed gratitude for the congratulations and the joint activities held in Tashkent in connection with important events.
The sides thoroughly discussed during negotiations the issues of further expanding political, trade, economic, investment, financial, technical, cultural and humanitarian cooperation, as well as those in the international and regional agendas.
Uzbekistan and Germany have maintained steadfast political dialogue. Frank-Walter Steinmeier visited Uzbekistan in 2006 and 2016 as Minister of Foreign Affairs of Germany. The official visit of President Shavkat Mirziyoyev to Germany in January 2019 opened a new page in development of interstate relations.
At the meeting at Kuksaroy residence, the important role of the two parliaments was noted in supporting multidimensional cooperation and sharing experience. Uzbekistan – Germany Law Forum that took place on May 23 in Tashkent proved rather useful in this respect.

The parties assessed the current state of trade and economic interaction and identified priority areas for its expansion. It was noted that in 2018 the trade turnover grew by 25% and exceeded 770 million dollars. Following the January summit meetings, more and more of German companies have been showing practical interest in Uzbekistan market. Measures have been analyzed and identified for the elaboration and acceleration of joint investment projects and programs.
The two countries closely cooperate within the framework of international institutions. Uzbekistan supports Germany’s aspiration to become a permanent member of the UN Security Council.

Berlin appreciates Tashkent’s efforts to bolster stability in the region, promote the peace process in Afghanistan, and overcome the consequences of the Aral Sea disaster.
The parties expressed shared willingness to continue with providing mutual support within the framework of international organizations. Issues of interaction in Uzbekistan – European Union format were also discussed.

The two sides considered issues of combating terrorism and extremism, building up security cooperation. The Presidents welcomed the launch of the mechanism of Uzbekistan – Germany consultations on Afghanistan to promote socio-economic, investment and infrastructure projects in that country.
The negotiations helped reaffirm Uzbekistan and Germany’s mutual commitment to the development of full-scale cooperation, as well as the proximity and coincidence of positions on all issues discussed.