President of Uzbekistan receives Chairman of Mazhilis of Parliament of Kazakhstan 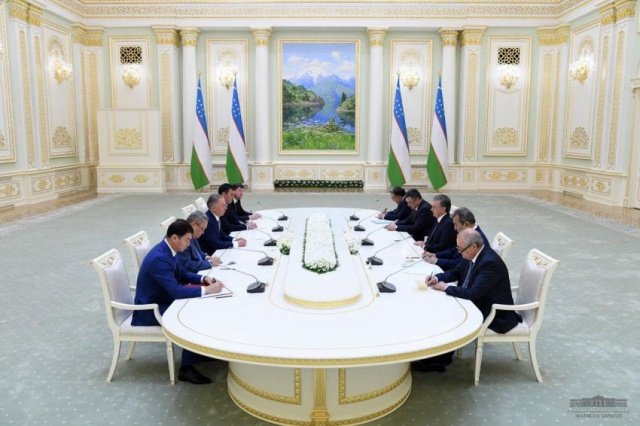 President of Uzbekistan receives Chairman of Mazhilis of Parliament of Kazakhstan

The increase in bilateral trade was noted with satisfaction. In 2018, the trade turnover increased by 50 percent and exceeded 3 billion USD. The target for the coming years is at least 5 billion dollars.
Promising projects based on cooperation are being implemented with participation of leading companies and enterprises of the two countries. New bus and train routes have been launched in the field of transport, flights frequency between cities has been increased, the volume of freight traffic is growing.
Interregional ties are becoming increasingly strong, cultural-humanitarian exchange is expanding. Last year Kazakhstan successfully hosted the Year of Uzbekistan, and this year the Year of Kazakhstan is held in Uzbekistan with a rich program of events.
Current issues of further development of Uzbekistan – Kazakhstan inter-parliamentary cooperation were also considered at the meeting.
Necessity of establishing active contacts at the level of relevant committees of parliaments and more efficient use of possibilities of inter-parliamentary friendship groups for timely implementation of agreements reached and promotion of new partnership projects was noted.

Nurlan Nigmatulin assured that the highest legislative body of Kazakhstan intends to further deepen inter-parliamentary relations, as well as fully promote the initiatives aimed at strengthening multifaceted cooperation in the interests of the two fraternal peoples.
Following the meeting, the President of Uzbekistan wished success to the upcoming Presidential Election in the Republic of Kazakhstan, the most important political event to be held on June 9 this year.