President: Should we fail to undertake this work in 2-3 years, each year of delay will cost 10 years of progress

President: Should we fail to undertake this work in 2-3 years, each year of delay will cost 10 years of progress

On May 11, President of the Republic of Uzbekistan Shavkat Mirziyoyev held a meeting on the widespread introduction of digital economy and e-government.
At the initiative of the head of state, this year was declared as the Year of Science, Education and Digital Economy. In his Address to the Oliy Majlis this January, the President identified active transition to the digital economy as one of the top priorities for the next five years.
The current pandemic has proven the importance of digital technology even more clearly. It became obvious that education, public services, public administration, trade and services are largely dependent on information technologies. Services that had not been provided remotely for many years have switched to online mode in a matter of days.
According to experts, in the next three years, 22 percent of jobs in the world will be created using internet technologies thanks to the digitalization of the economy.
With this in mind, earlier, on April 28, the President inked a decree on measures for the widespread introduction of the digital economy and e-government. In accordance with the document, an integrated system for the digital economy has been created at the Ministry for Information Technologies and Communications. In particular, development of e-government, the digitalization of economic and agricultural sectors, the organization and management of IT parks and similar tasks were completely transferred to the ministry.
However, the resolution specifically indicates the financial sources of new projects. It is planned to implement 104 projects for the amount of 1.3 trillion soums in the electronic government, 87 projects for 5.3 trillion soums in the real sector of the economy, 35 schemes for 15.1 trillion soums in the telecommunications sector, 18 schemes in IT parks and 24 in the agricultural sector.
At the meeting, Shavkat Mirziyoyev noted thus, “If we fail to undertake this work in 2-3 years, each year of delay will cost our country 10 years of progress.”

The current state of digitalization of services was analyzed. It was noted that only 30 percent of the more than 700 information systems in government agencies are connected to e-government. Of the 80 government agencies providing public services, only 27 are integrated with the Agency for Public Services.
The President urged to introduce a procedure for increasing or reducing the amount of bonus payments to heads of ministries and agencies based on the level of implementation of information technologies.
The Ministry for Information Technologies and Communications has been tasked with classifying the databases of government departments, connecting them to an interagency integration platform and introducing common technological requirements for electronic interaction.
Given the impact of the pandemic, the importance of accelerating the transition of the most popular public services to electronic form was emphasized.
Instructions were given regarding the introduction by the end of this year, in Tashkent, of electronic medical records, e-hospital systems and emergency medical care, the establishment of a unified register of social protection for keeping records of social benefits.
The State Tax Committee has been ordered to transfer trade and service facilities to work with online cash registers, launch alcohol and tobacco product labeling and electronic invoices.
Over the next five years, due to the widespread introduction of information technology in industrial enterprises, it will be possible to reduce costs by 13-15 percent.
The Ministry of Transport was instructed to deliver automated payment systems for the transportation of goods by rail and for public transport services in Tashkent, to speed up the introduction of a single electronic ticket for all modes of transport.
The meeting participants discussed the development of information technology infrastructure. According to a World Bank report, expanding the broadband internet access networks by 10 percent could increase GDP by at least 1 percent.
This year the goal is to widen the coverage of fiber-optic communications in the preschool education system from 41 to 100 percent, from 40 to 70 percent in the public education system, and from 38 to 100 percent in healthcare. Thanks to this, many villages will have access to the internet.
In this regard, the Ministry of Information Technology and Communications has been tasked with providing social facilities with high-speed internet access, and by the end of the year to reach high-speed mobile internet coverage up to 90 percent.
It was noted that the capacity of existing servers is running out, and that for the implementation of more than 300 projects in the field, 10 times more server capacities are required. Instructions were given to boost the number of data processing centers, attract foreign loans and build a data center for $ 30 million.
Information technology is also very useful in agriculture, land accounting and monitoring. Thus, space reconnaissance of soil can be used to study cultivated areas, the vegetation process, the reclamation state of the soil and the degree of mineralization. This will augment productivity by 25-30 percent owing to clear-cut determination of agricultural activities.
Responsible officials were tasked with developing electronic land and water metering systems, fully digitizing processes from the location of crops to their implementation.
The national IT sector employs around 60 thousand people. It was noted that this was not enough, and special attention was paid to issues of supporting industry specialists.
The meeting helped also to define tasks for attracting residents of local technology parks to projects implemented by state organizations.
The President stressed the necessity of covering 47 thousand students with the project “1 million programmers” in the next academic year, of establishing training in the basics of programming in schools starting from the 7th grade.
Relevant executives presented information on the implementation of measures in the field. 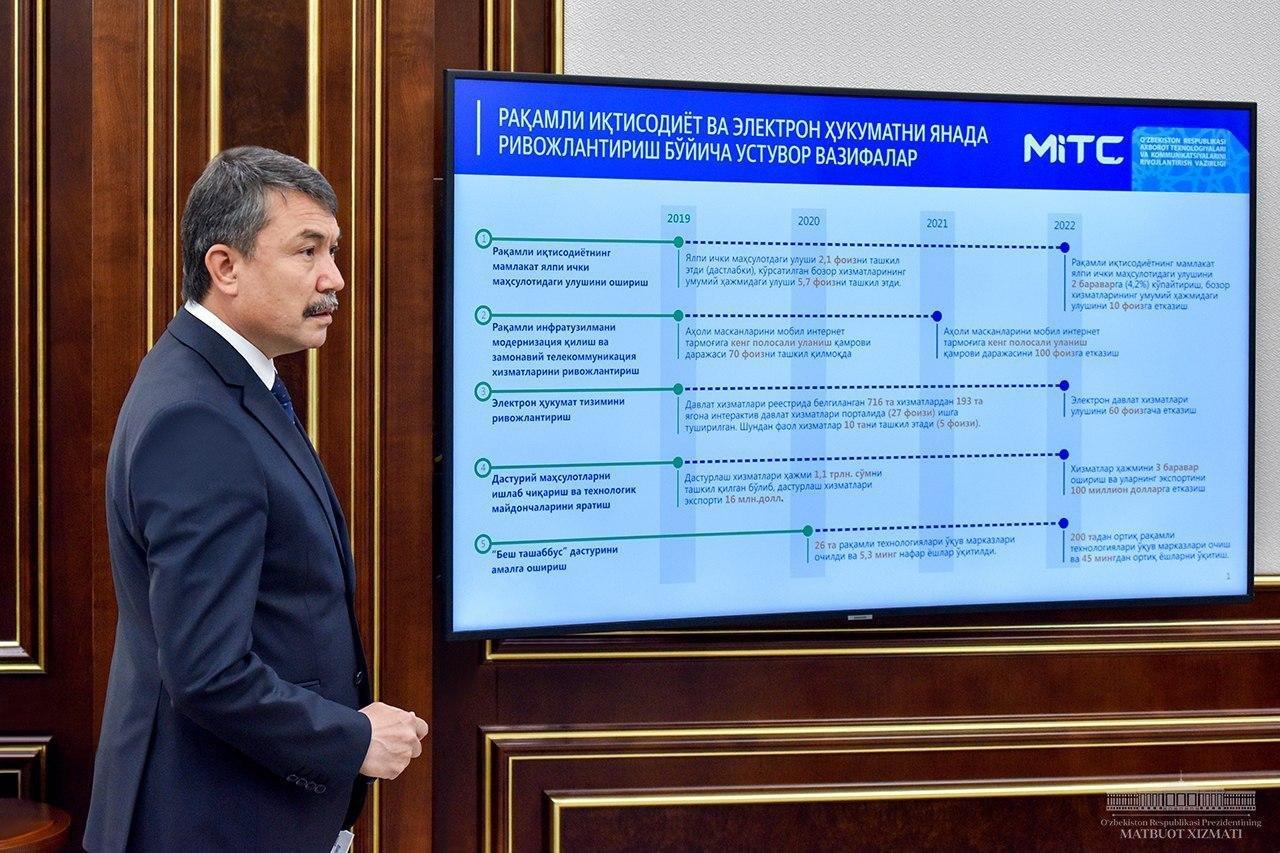 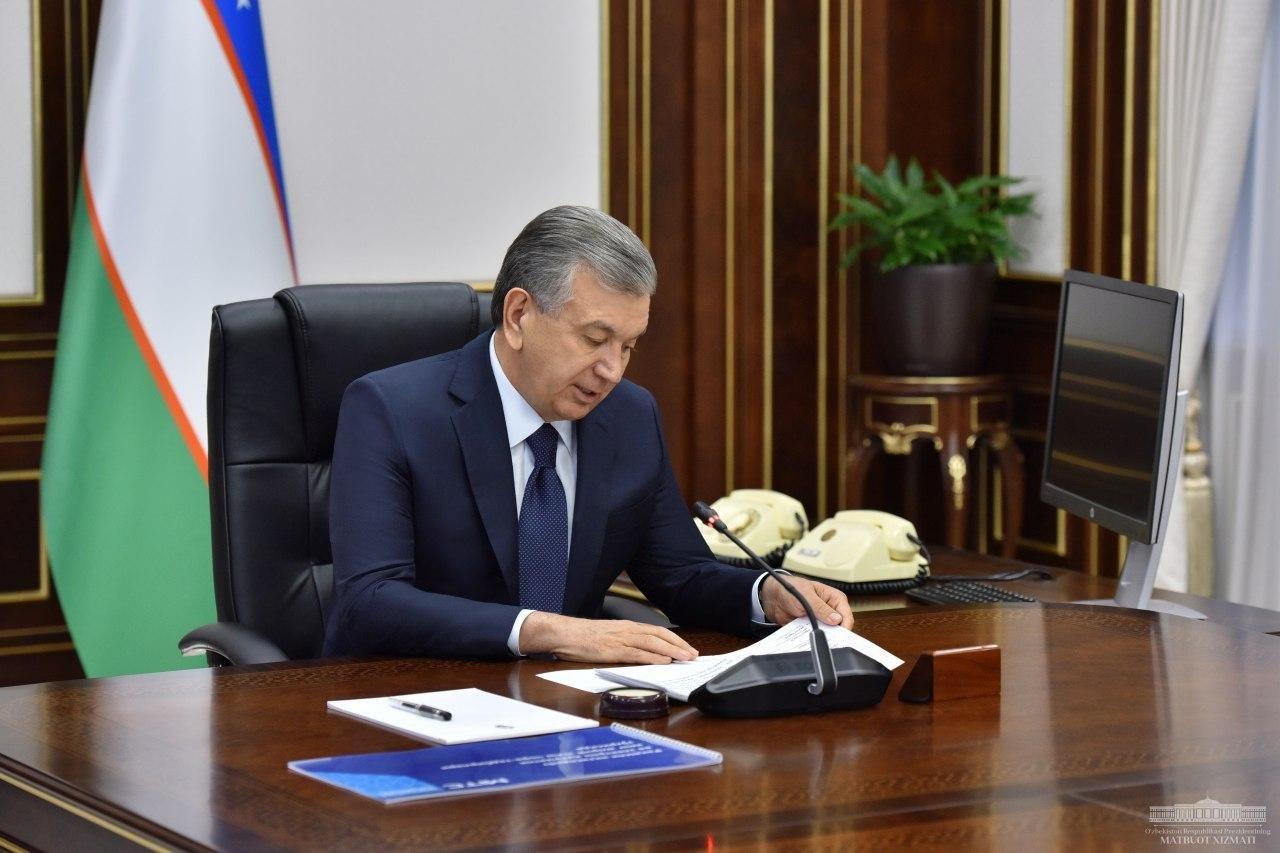