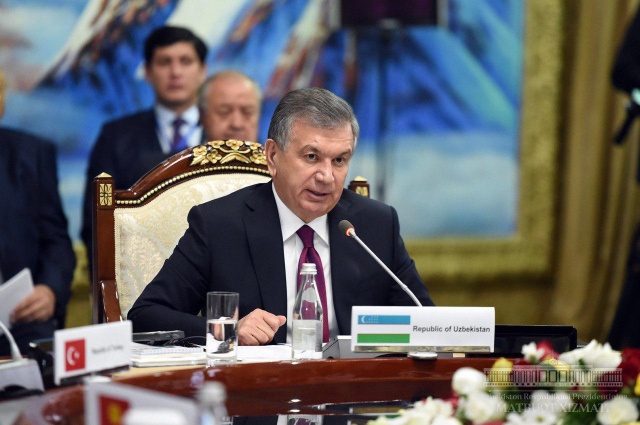 On September 3, the Sixth Summit of the Cooperation Council of Turkic Speaking States was held in Cholpon-Ata, Kyrgyzstan.

The President of the Republic of Uzbekistan Shavkat Mirziyoyev and the Prime Minister of Hungary Viktor Orban took part at the summit as guests of honor.

The President of Uzbekistan in his speech noted that our people are connected by similarity of languages, commonality of spiritual values and ties of cooperation, today there are no problems or disagreements on political agenda of the council.

“Our countries have similar views and approaches in current international and regional issues. At the same time, cooperation in such spheres as economy, investment, innovation, transport and communications, tourism, science and education is actively developing, which fully meets the vital interests of our people”, said Shavkat Mirziyoyev.

Thanks to the political will, open and constructive foreign policy of the President of Uzbekistan, an environment of trust has been established in Central Asia, friendly ties have been strengthened between the countries of the region.

As a result of meetings and dialogue at the highest level, cooperation with Kazakhstan, Kyrgyzstan, Turkey and Azerbaijan, covering various areas, has been further strengthened. Over the past year, the trade turnover of Uzbekistan with member states of the Turkic Speaking Council has increased by more than 40 percent. The President of Uzbekistan noted the possibility of achieving even higher rates and proposed important directions for development of relations within the framework of the Cooperation Council of Turkic Speaking States.

First of all, the need for expanding trade, economic and investment cooperation, strengthening cooperation between leading industrial enterprises, banking and financial institutions and business entities was emphasized.

Attention was paid to creation of an integrated network of transport corridors, access to major global and regional markets. The need for innovative development of the countries, expansion of cooperation of responsible departments, research centers and venture companies was noted. Vast possibilities for development of tourism was noted. Strengthening cultural and humanitarian ties will contribute to further rapprochement of our people. Special attention was also paid to ensuring peace and security, educating enlightened young generation.

President Shavkat Mirziyoyev noted that Uzbekistan consistently develops cooperation with countries of the Cooperation Council of Turkic Speaking States, primarily with neighbors, and looks to the future of this international structure with great hope.

“We are interested in further development of mutually beneficial cooperation within the framework of the Turkic Council. At this stage, we are ready to participate in its activities in areas of practical interest for our country”, said Shavkat Mirziyoyev.

The President of Uzbekistan congratulated the President Sooronbay Jeenbekov on the transfer of the chairmanship in the Cooperation Council of Turkic Speaking States to the Kyrgyz Republic.