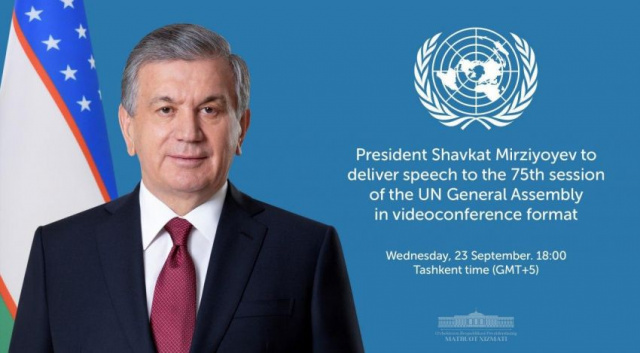 On 23 September, President of the Republic of Uzbekistan Shavkat Mirziyoyev will take part in the highest level general political debates at the 75th session of the United Nations General Assembly.

For the first time in the history of the UN, the central events of the General Assembly are to take place in videoconference format due to the epidemiological situation in the world.

In his address to the session, the head of our state is anticipated to present the international community with his vision of the pressing issues on regional and global agenda and outline priorities of the political, social and economic modernization of Uzbekistan.

As the principal topic of overall debates suggests, President Shavkat Mirziyoyev is scheduled to speak about joint efforts to combat coronavirus pandemic and overcome its impact.

Uzbekistan’s leader is expected to put forward a range of important initiatives designed to bolster peace and stability, secure sustainable development, enhance constructive dialogue in the region and at the global level, promote human rights and freedoms, as well as address contemporary challenges and threats, including climate change, food security, poverty reduction.

It is worth reminding that in his speech at the 72nd session of the UN General Assembly in September 2017 in New York, Shavkat Mirziyoyev voiced a number of vital proposals.

As part of their implementation, consultative meetings of the heads of Central Asian states are held regularly.

In particular, the second such meeting took place in our country’s capital city last November.

In March 2018, Tashkent played host to a high-level international conference on Afghanistan, the declaration adopted whereby has come to be a “roadmap” for ensuing inter-Afghan peace talks.

Currently, a draft UN Convention on the Rights of Youth is being worked out, whose relevance was emphasized once more by international participants of the Samarkand Forum “Youth 2020: Global Solidarity, Sustainable Development and Human Rights” in August this year.

Established two years ago, the Multi-Partner Human Security Trust Fund for the Aral Sea Region is carrying out its practical activities.

In a word, all the initiatives voiced by President Shavkat Mirziyoyev have received extensive support in the world community and are finding practical implementation.

The President of the Republic of Uzbekistan H.E. Mr. Shavkat Mirziyoyev will deliver a speech at 75th session of the United Nations General Assembly on 23 September 2020, at 15:00 by Austrian time.