President of the Federal Republic of Germany arrives in Uzbekistan 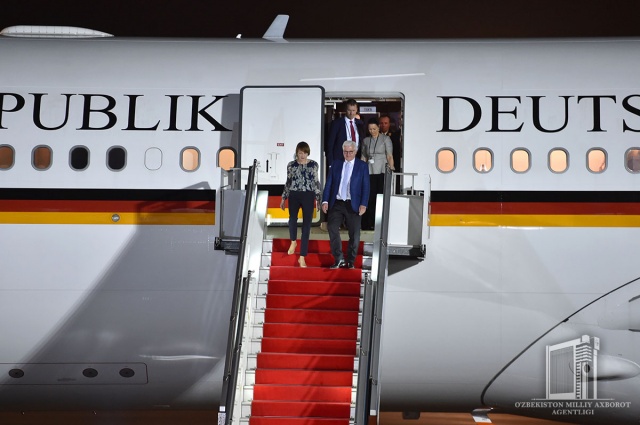 President of the Federal Republic of Germany arrives in Uzbekistan

On May 27, at the invitation of President of the Republic of Uzbekistan Shavkat Mirziyoyev, President of the Federal Republic of Germany Frank-Walter Steinmeier arrived in Uzbekistan for an official visit.
Prime Minister of the Republic of Uzbekistan Abdulla Aripov met the distinguished guest at Tashkent International Airport named after Islam Karimov.
Frank-Walter Steinmeier, at the residence designated for him, met with representatives of German institutions operating in Uzbekistan, such as the German Society for International Cooperation (GIZ), the Goethe Institute in Tashkent, the Konrad Adenauer and Friedrich Ebert Foundations, the German Academic Exchange Service (DAAD).
The main events of the visit are scheduled for May 28.
The Presidents are expected to discuss prospects for further enhancement of bilateral cooperation in political, trade-economic, investment, financial-technical and cultural-humanitarian fields, as well as interaction within Uzbekistan – European Union format.
The parties intend also to exchange views on pressing issues in the international and regional agenda.
Following the talks, the parties expect to sign agreements aimed at further strengthening bilateral relations in the economy, finance, education, healthcare and environmental protection.
During the visit, Frank-Walter Steinmeier plans to meet with representatives of leading companies and banks of Uzbekistan and Germany, civil society institutions, and visit a number of industrial enterprises and cultural institutions.
The Federal President of Germany will visit Khorezm region, where he is anticipated to meet with faculty and students of Urgench State University, as well as become acquainted with historical and architectural landmarks of the city of Khiva.