AN ORGANIZATIONAL ISSUE IS INCLUDED ON THE AGENDA OF THE SESSION 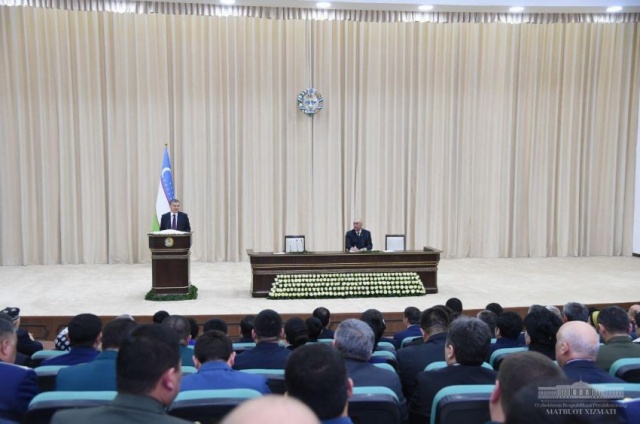 AN ORGANIZATIONAL ISSUE IS INCLUDED ON THE AGENDA OF THE SESSION

Samarkand hosts an extraordinary session of the regional Kengash (Council) of people’s deputies.
At the session, the President of the Republic of Uzbekistan Shavkat Mirziyoyev expressed deep respect to the region’s residents, selflessly working for the sake of the country’s prosperity, noted the ongoing large-scale work on development of the social sphere and economy, improvement of people’s lives.
In particular, construction and improvement works of almost 200 billion UZS were carried out in nine villages and four makhallas within the framework of “Obod qishloq” (“Prosperous village”), “Obod makhalla” (“Prosperous neighborhood”) programs. Last year, 36 multi-storey buildings with 1,5 thousand apartments, 2,349 affordable houses were built. About 60 state kindergartens were erected, 356 non-state institutions of pre-school education were opened. Specific activities have been carried out on development of healthcare, supporting women, reconstruction of utility networks.
The Head of the state gave instructions on establishment of cooperation with leading universities of Germany and organization of personnel training in digital economy in Samarkand.
The President will determine further tasks for development of the region’s economy, enhancing the attraction of investments. At the session, it is expected to approve the khokim of Samarkand region.