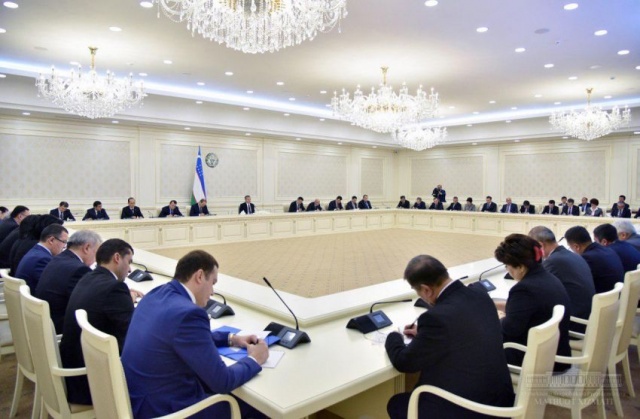 On November 9, a meeting was held under the chairmanship of the President of the Republic of Uzbekistan Shavkat Mirziyoyev dedicated to the analysis of the results of ongoing reforms on development of healthcare system, coverage of regional residents with high-quality medical care, strengthening the material and technical base of medical institutions, as well as identifying future priorities.
The Head of the state noted that the main goal of all reforms is to improve people’s lives, an important place in this is taken by high-quality medicine.
Over the past two years, 50 decrees, resolutions and orders of the President, more than 70 resolutions and orders of the Cabinet of Ministers have been adopted in this sphere. 6 new scientific practical medical centers were organized, their total number reached 16. In the regions, 10 branches of centers were opened for creating even greater amenities for the population. In the district and city hospitals, 306 new specialized departments, 1.2 thousand emergency rooms were organized.
In general, this year the State budget allocated 40 percent more funds to medicine compared with 2017. At the meeting, it was noted that next year it is planned to allocate 30 percent more funds to the sphere than this year.
The recent resolution of the President “On measures of strengthening the material incentives for employees of state medical institutions and healthcare authorities” became another important step in this direction. In accordance with it, the wages of medical workers will be increased by 20 percent from December 1 of the current year and another 15 percent from April 1, 2019.
Many decrees and resolutions have been adopted, ample opportunities have been created for the sphere, and current issues have been resolved. However, the healthcare system isn’t yielding the expected results. Especially in districts, remote settlements, residents do not feel the effect of serious and radical changes in medical care, said Shavkat Mirziyoyev.