ISSUES OF FURTHER DEVELOPMENT OF ELECTRIC POWER INDUSTRY ARE CONSIDERED 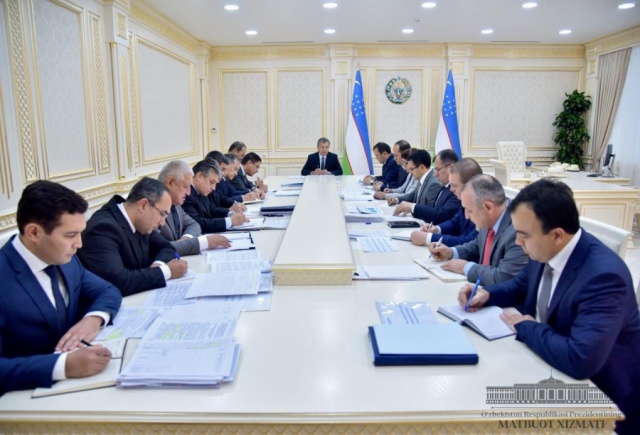 ISSUES OF FURTHER DEVELOPMENT OF ELECTRIC POWER INDUSTRY ARE CONSIDERED

On October 3, the President of the Republic of Uzbekistan Shavkat Mirziyoyev held a meeting on in-depth analysis of the state of affairs in electric power industry, identifying additional measures for further development of the sphere.
– Electric power industry is the engine of the economy, it is impossible to imagine socio-economic development, our life as a whole, without it, – said Shavkat Mirziyoyev. – Our country has the capacity to generate 14 thousand megawatts of energy, 86 percent of which fall on thermal power stations.
However, 84 percent of thermal power stations’ capacity were put into operation almost half a century ago, the existing capacity is loaded by 83 percent.
If 240-260 grams of fuel is consumed to produce 1 kilowatt of electricity in developed countries, then at some stations of our country fuel is consumed twice as much.
As a result of economic sectors development of the country, the need for electricity by 2030 will reach 20 thousand megawatts.
Electricity in Uzbekistan is produced mainly by flaring natural gas. By 2030, the volume of gas flaring will increase even more, which, in conditions of limited resource, would mean wasting a huge amount of this non-renewable energy source.
– Commissioning of a nuclear power station will become a revolutionary solution in reducing fuel consumption, but it will take another 8-10 years. Therefore, it is necessary to quickly eliminate the existing problems and drastically develop the industry, the most important thing, to ensure noticeable positive changes in this system in a short time, – the President said.