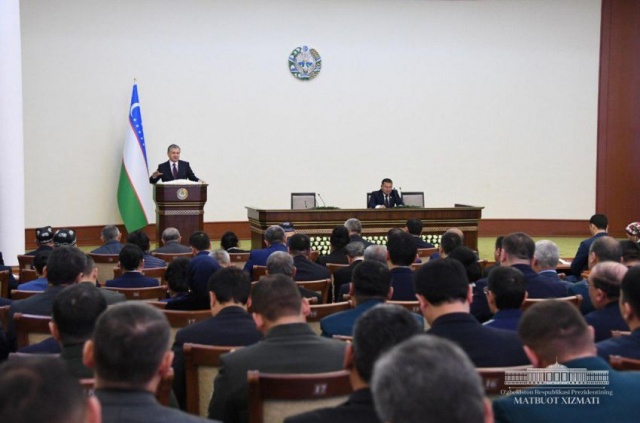 On November 30, an Extraordinary Session of Khorezm Regional Kengash of People’s Deputies opened in the city of Urgench.
The session is attended by the President of the Republic of Uzbekistan Shavkat Mirziyoyev.
The Head of the state noted that a number of activities are being carried out in Khorezm region on development of the economy, improving the social conditions of the population.
This year, 312 investment projects were implemented in the region, new enterprises were commissioned. At the end of the year, it is expected that the volume of industrial production will grow by 16 percent, exports will increase by 22 percent.
100 state and non-state preschool education institutions were organized, the coverage of children by kindergartens reached 33 percent.
Specific measures have been taken to address issues of drinking water and electricity supply that are relevant for Khorezm. 254 kilometers of power lines, 456 kilometers of water supply network were built and reconstructed.
The President noted that jobs created over the past period are not enough, unemployment persists in the region. The Head of the state gave instructions on development of the economy, organization of new and expansion of existing industrial enterprises, increasing employment through development of agriculture, tourism and entrepreneurship.
The agenda of the session includes the issue of appointing the Khokim of Khorezm region.