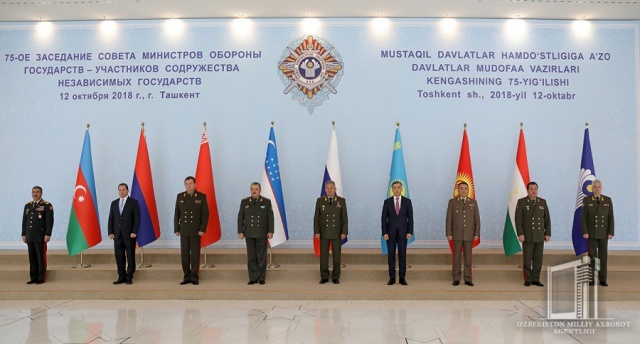 On October 12, Tashkent hosted a regular meeting of the Council of Defense Ministers of the Commonwealth of Independent States.
It was attended by Ministers of Defense of Uzbekistan A.Azizov, Azerbaijan – Z.Hasanov, Armenia – D.Tonoyan, Belarus – A.Ravkov, Kazakhstan – N.Yermekbayev, Russia – S.Shoigu, Tajikistan – Sh.Mirzo, Chief of the General Staff of the Armed Forces of Kyrgyzstan R.Duishenbiev and Secretary of the Council of CIS Defense Ministers Y.Dashkin.
The Minister of Defense of the Russian Federation, General of the Army Sergei Shoigu chaired the meeting.
At the meeting, issues of cooperation in the field of ensuring security were discussed. It was noted that in terms of increasing various threats and challenges in the countries of near and far abroad, the issue of ensuring stability is becoming more and more serious. The meeting of the CIS Council of Defense Ministers, held in Uzbekistan for the first time, serves as an important platform for expanding multilateral military cooperation. It was emphasized that during this period, this structure has become a practical body that ensures fruitful military cooperation, develops proposals regarding military policy and military construction, and conflict prevention. The Defense Ministers emphasized that in today’s extremely difficult conditions, any opportunity to meet and exchange views is useful for jointly finding solutions in the process of countering terrorism, radicalism, extremism and drug trafficking, resolving emerging conflicts.
Uzbekistan pays special attention to strengthening military and military-technical cooperation with almost all CIS countries. Representatives of Uzbekistan participate in activities of all the committees of the Commonwealth. Cooperation is expanding in the spheres of military intelligence and information exchange. The military personnel of Uzbekistan actively participate in the Army International Games, Olympiads and championships among the military countries of the Commonwealth.
At the meeting, issues of cooperation in the field of aviation of the armed forces of the CIS member states, creating a unified system of state radar identification, conducting subject competitions among cadets of military schools, joint events on the occasion of the 75th Anniversary of Victory in the World War II were considered.
Council members approved the Work Plan of the CIS Council of Defense Ministers for 2019. Documents aimed at developing a unified communications system for the armed forces of the CIS member states, conducting joint exercises of air defense troops and the air forces of the CIS member states, software for the activities of the armed forces for the period up to 2022, establishing cooperation in the spheres of navigation, metrology, topography and geodesy were also signed.
At the meeting, the situation in Central Asia, the priorities for countering international terrorism, development of military cooperation, prospects of the work of the Joint System for the Evaluation and Control of Radiation, Chemical and Biological Situations were also discussed.
The heads of defense ministries were awarded memorable badges of the Ministry of Defense of the Republic of Uzbekistan “For merits in strengthening combat commonwealth”.