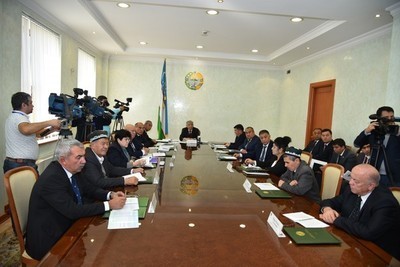 On 8 November, the Central Election Commission of the Republic of Uzbekistan held its regular meeting chaired by Chairman M. Abdusalomov. The meeting saw representatives of political parties, members of OSCE / ODIHR mission, as well as mass media representatives.

Citizens of the Republic of Uzbekistan who have reached 18 years of age have the right to vote in the elections. Any direct or indirect restriction of the electoral rights of citizens of the Republic of Uzbekistan depending on origin, social or property status, racial and national belonging, sex, education, language, attitude to religion, type and nature of occupation are prohibited.

The Program to raise the legal culture of voters in preparation for elections of the President of the Republic of Uzbekistan is being consistently implemented. ,

Further update and democratization are inextricably linked with ensuring of the electoral rights of citizens. An extensive outreach work is carried out to explain the national electoral system, the nature and significance of the Law "On elections of President of the Republic of Uzbekistan", its amendments and supplements. Activities are also underway among the wider population, in particular women, youth, including among those who are voting for the first time, the elderly, persons with disabilities, military personnel, representatives of local authorities, labor collectives, educational establishments abroad.

The participation of international observers contributes to strengthening the openness and transparency of the electoral process.

The meeting adopted a resolution on the accreditation of 20 long-term observers of the ODIHR OSCE mission, who arrived in our country on November 6-7 this year.