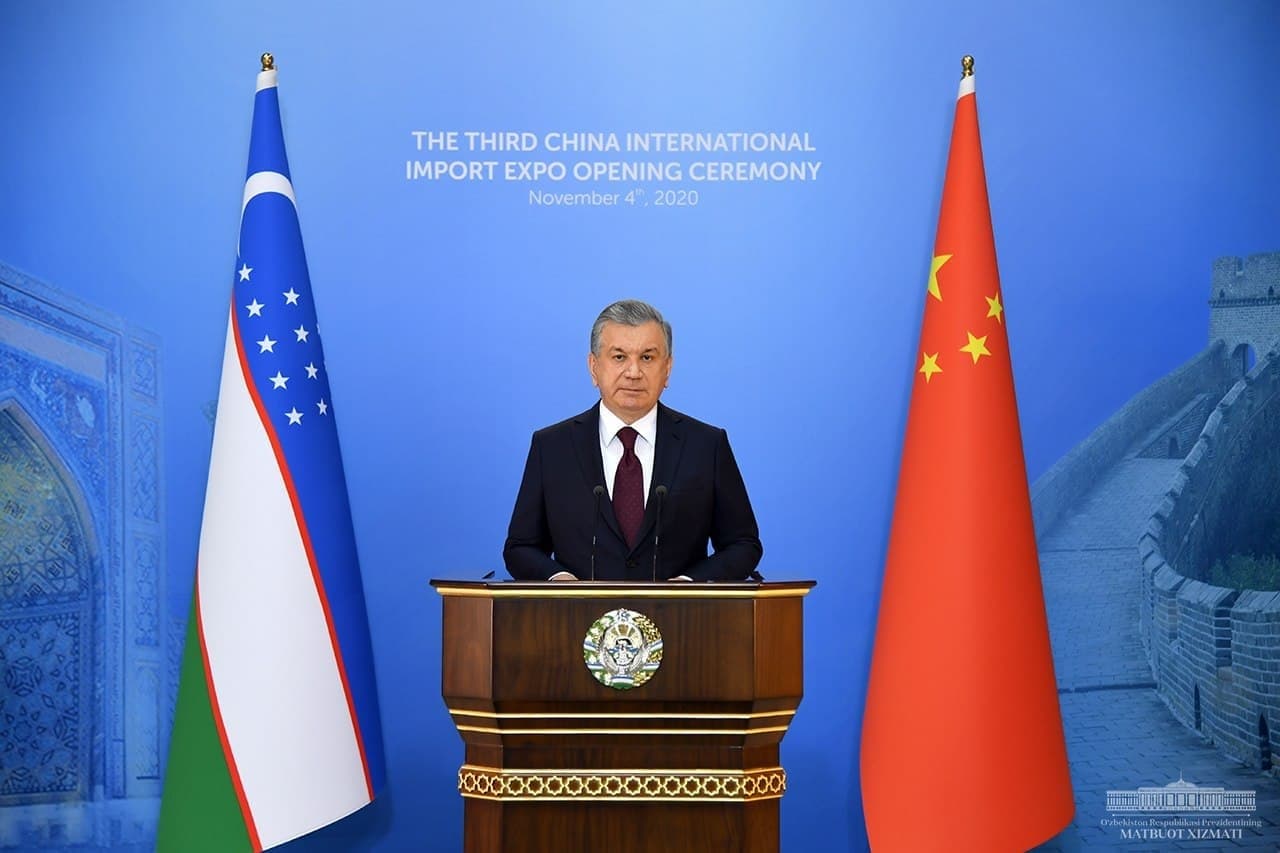 Yesterday, President of the Republic of Uzbekistan Shavkat Mirziyoyev, at the invitation of President of the People’s Republic of China Xi Jinping, delivered a welcoming video message to the participants of the opening ceremony of the third China International Import Expo CIIE-2020 in the city of Shanghai, reports “Dunyo” IA correspondent.

According to the Press Service of the President of the Republic of Uzbekistan, in his speech, the head of our state noted that such a large-scale event as this Expo is indicative of China’s success in restoring the national economy and the exceptional demand for broader international cooperation amid the current pandemic.

In this respect, the Uzbek leader expounded on key issues pertinent to the enhancement of mutually advantageous trade and economic interaction and the development of ties among regions of countries in the context of the global crisis.

Consolidation of cooperation in transport and expansion of Central Asia’s transport and transit potential remains an important priority, the head of our state noted.

In light of Uzbekistan’s active support for the One Belt One Road initiative, which opens up extensive prospects for bolstering the regional and interregional connectedness, confidence was expressed that Central Asia, as in the days of the Great Silk Road, could again become a hub of transport and transit corridors between Europe and Asia.

Shavkat Mirziyoyev stressed the great importance of the initiative to create new corridors connecting the railway systems of Central and South Asia, which would seal the land transport system of the Eurasian continent.

In this regard, the head of state informed the ceremony participants that our country is in favor of accelerating the realization of a project for the construction of railroad along the route of the new multimodal transport corridor China-Kyrgyzstan-Uzbekistan.

In addition, it was proposed to unite efforts in forming an integrated network of land ports, logistics and wholesale distribution centers within the framework of the One Belt One Road initiative.

Taking into account the demand for these initiatives, hope was expressed for the active support of partners and international organizations for Uzbekistan’s proposal to establish a Regional Center for Transport and Communication Interconnectedness under the auspices of the United Nations, voiced during the 75th session of the UN General Assembly.

President Shavkat Mirziyoyev announced the country’s readiness for vigorous advancement of industrial cooperation, organization of new joint ventures, primarily for the deep processing of mineral resources and the production of goods with high added value for export markets.

To this end, the head of our state suggested that a joint program be adopted to promote industrial cooperation and stimulate business representatives of the two countries to spearhead specific projects using various instruments of joint investment funds, investment guarantees and insurance.

Uzbekistan’s leader drew the attention of ceremony participants to the fact that in the context of the pandemic, speeding up digitalization processes of the economy has acquired particular urgency.

In this respect, Shavkat Mirziyoyev proposed to develop joint measures on an even wider introduction of information technologies in international trade, customs clearance, transport, education.

The President spoke about the pressing need for closer international coordination and interaction at the bilateral and regional levels to overcome the socio-economic crisis caused by the coronavirus contagion.

No country, it was highlighted, can overcome the consequences of the pandemic by its own in the face of production decline, the growing demand for medical supplies, financial instability and disruption of global supply chains.

In conclusion, Shavkat Mirziyoyev wished the participants of the Expo successful work and expressed confidence that the exhibition will afford an additional impetus to the process of restoring world trade and boosting the international economic cooperation.

Leaders of Serbia, Chile, South Africa, Spain, Pakistan and other countries, heads of a number of international organizations also delivered statements to the ceremony.

Within the framework of the third China International Import Expo 2020, the Uzbek-Chinese business forum is due November 5 in Shanghai. About 150 representatives of major Chinese trade and investment companies are expected to attend the event.

The forum is to play host to a presentation of the investment, export and tourism potential of Uzbekistan. In particular, Chinese business circles will get acquainted with new opportunities for cooperation with Uzbek partners in the oil and gas, textile, chemical, electrical engineering, metallurgical, food, agricultural and construction industries.

Occasion participants will also be informed about the favorable business climate in Uzbekistan, conditions for doing business in free economic zones, achievements in economic development across sectors.