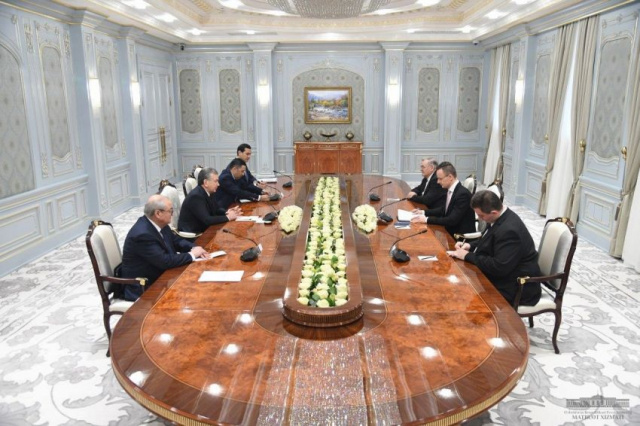 On February 18, the President of the Republic of Uzbekistan Shavkat Mirziyoyev met with a Hungarian delegation led by the Minister of Foreign Affairs and Trade Péter Szijjártó, who is in Uzbekistan on a working visit to hold the next meeting of a joint intergovernmental commission.
The Head of the state noted with deep satisfaction the dynamic development in recent years of Uzbekistan – Hungarian relations of traditional friendship and multifaceted partnership.

Productive contacts have been established between the two countries at various levels. Last year, the trade turnover grew by 45 percent. Joint projects are being implemented in agriculture, food industry, pharmaceuticals and other sectors of the economy. Exchanges in education, culture and tourism are expanding.
Péter Szijjártó, sincerely thanking the President of Uzbekistan for the warm welcome, conveyed the best wishes of the Hungarian Prime Minister Viktor Orbán.
Views were exchanged on pressing issues of bilateral cooperation and regional interaction, including in the format of a dialogue with the European Union.
Particular attention was paid to the promotion of joint investment projects with the introduction of best practices and modern technologies of leading Hungarian companies, as well as their financing.

At the meeting, prospects for development of interregional ties, implementation of programs in the banking sector, in the field of transport, training of highly qualified specialists were discussed.
A schedule of the upcoming summit meetings was also considered.
Close